Instead, yesterday, 4/20/2019, the “long-suffering” Mrs. Appalachian Irishman and I drove to the home of my youngest brother and family (wife and two daughters), in Rogersville. The four female folk did female folk things.

Doug and I, in his new-to-him Nissan Frontier, went to the homeplace. The weather was cloudy, windy, and off and on rainy, but not as bad as the day before. We stood back upright Granny Wood’s grapevine support that had fallen a few months ago. The grapevine is still living. Doug planted flowers in the flowerbed, near the front porch, in memory of Granny Wood and Mom.

Afterward, as a light rain began to fall, we both did a little target shooting! (That morning, I had predicted that rain would fall as we started to shoot.) I shot my new, replacement Ruger LCP for the first time. We only fired a few rounds, but we shot well. I shot better than I thought that I would, after my over three-year “sabbatical” from target shooting!

Unfortunately, I forget to take any photos. The photos are in my mind. It was a fine day.

I have checked off another goal. I have replaced my Ruger LCP and gone target shooting again! A next goal is to be able to run as I once did, before having the surgically installed metal in my left shoulder, right knee, and right foot. Lord willing, by my shear determination, I WILL do that one day!

Written by M. Fearghail at 4:14 PM No comments: 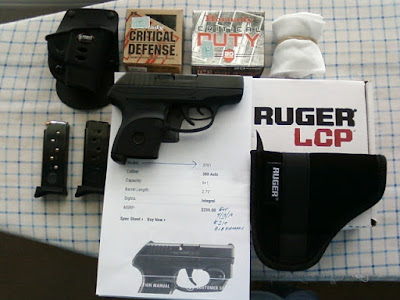 On 4/13/1880, my paternal grandfather, Marion Ferrell, was born. I wear his first name with honor, knowing the Irish meaning. The Gaelic is Merrion, which means “brave man.”

On 3/29/2016, the TN Highway Patrol held that first pistol, for safe keeping, at their Knoxville location – due to the 18-year-old, uninsured female, who failed to yield to my right of way and almost killed me on that date.

In early March of 2017, a TN Highway Patrol officer had called me and stated that they would be glad to hold my old Ruger, even over a year, if I wished to call them, before 3/29/2017, to make the proper arrangements. I thanked the very kind and understanding officer for her time. I never called to extend the pick up, due to all the “fun” in life. I had assumed that the TN Highway Patrol had destroyed my old Ruger. Later, I learned that my old Ruger may have become a backup weapon for an officer.

The last time that I had “pulled a trigger” was on 3/25/2016, Good Friday. I was at the homeplace. Steve (a lifelong friend), Monnie (neighbor), and I did some target shooting. We had a great day!

Enjoy the photo of my purchase today!

Written by M. Fearghail at 6:18 PM No comments: