Ten years ago today, at 5:15 PM, Mom went to be with Jesus. She was the best mother that I could have ever had. Taken at only 68 years old, Mom could still be alive today, touching the lives of family and friends in her unique way. Mom’s absence has been felt strongly these past ten years.

Mom, I miss you, but I know that you are in a far better place. Tell everyone, Granny, Papaw, Uncle Bobbie, Dad, and so many others, that I will see them someday. Life goes on here, until we are all reunited there.

I love you, Mom, bunches and bunches!

Email ThisBlogThis!Share to TwitterShare to FacebookShare to Pinterest
Labels: "Light at the End of the Tunnel", Family

Hike number 75! The Appalachian Irishman is three-fourths of the way toward requesting that House Mountain be renamed after him!

The first three photos are taken along the west trail, near the west bluff. I’ve passed this tree trunk that grew out of this rock formation many times. That tree, once alive, now dead, teaches me defiance and survival against the odds! 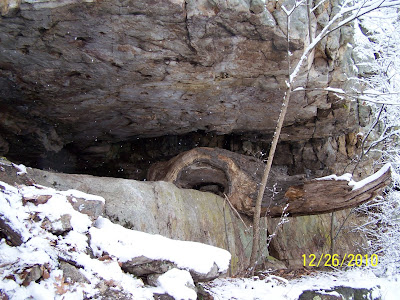 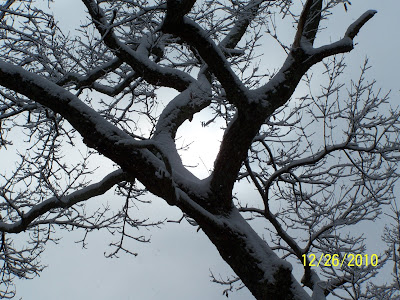 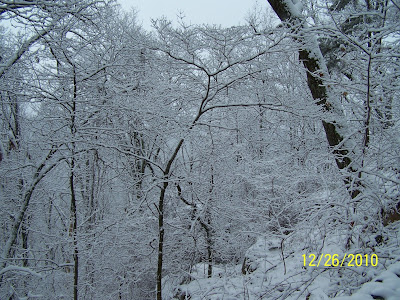 The next three shots are from the west bluff. A strong, cold wind was blowing snow in from the north. I put my top layer back on and stayed a while. The camera doesn’t capture the view that the eye will always remember! Yes, that’s Leak Rock! Yes, I did! Of course, as I headed east along the ridge, I had to write (with my finger) “Appalachian Irishman” in the snow on a large, smooth rock! Advertising is everything! 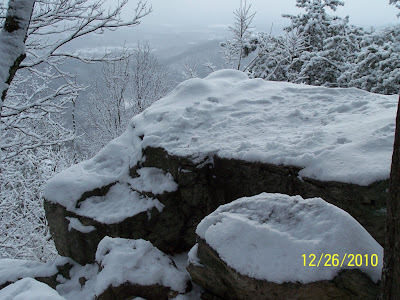 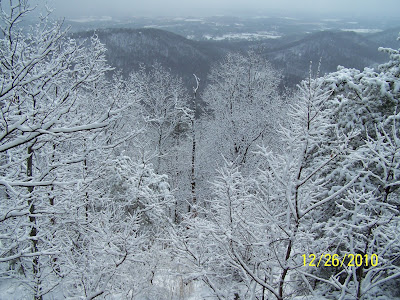 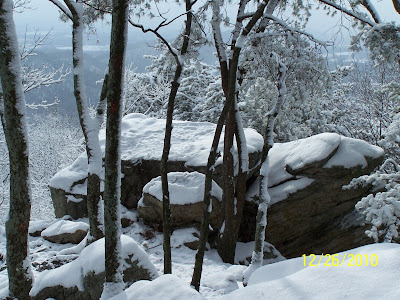 The first of these next two is a communications building that is located about half way along the ridge. Could someone give me a job running the equipment? The next shot is what is left of an old two-seater outhouse, which has been hit with buckshot several times over the years. It leans near the base of where the old fire tower used to stand. Remember, the purpose of a two-seater outhouse is so you can encourage each other! 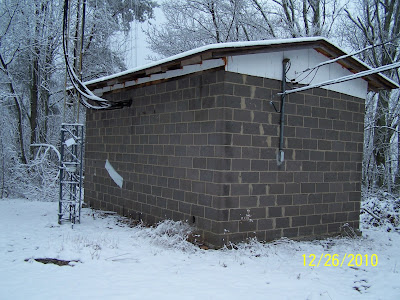 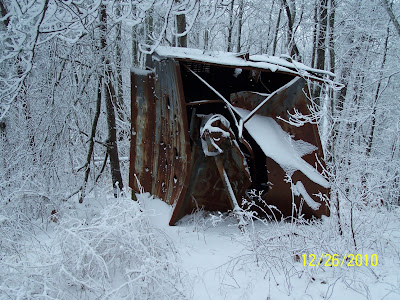 These next three photos are taken along the ridge toward the east bluff and at the east bluff. The snow draped the mountain and the trees in brilliant white. The cold north wind blew snow from the laden trees onto the ground – and down my back. The old oak tree has stood proudly many years. 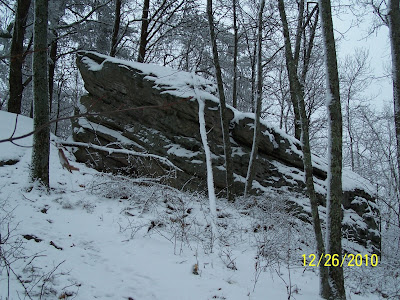 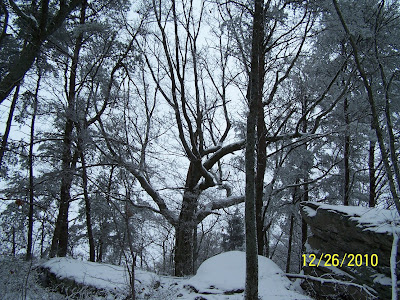 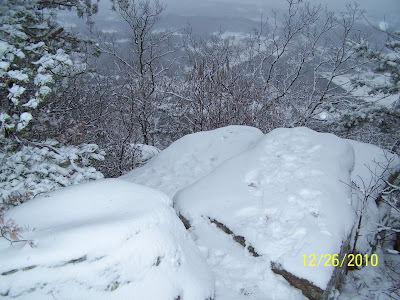 The final four shots are from the two north bluffs. One, where the flag stands, is just east and higher than the other. I have not taken before a shot of the small cave opening, near the lower northern bluff. Looks like a good place to take shelter! 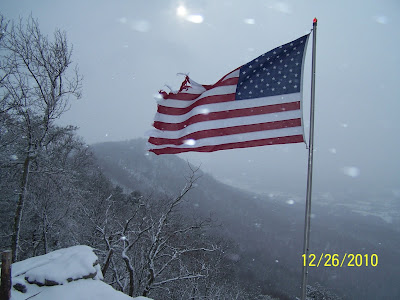 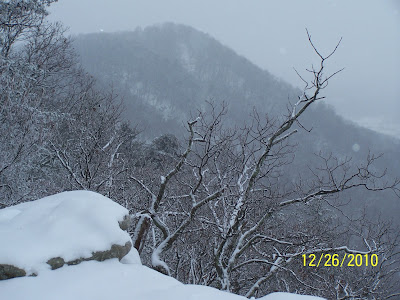 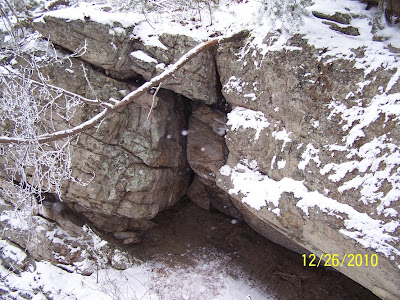 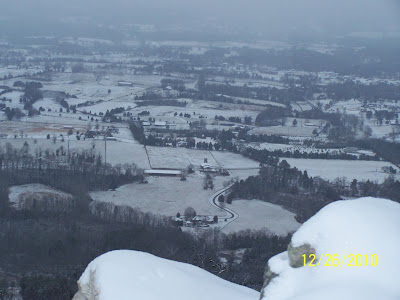 Hum! The Appalachian Irishman wishes he could hike, camp, photograph, and write for a living! Thank you, House Mountain. I needed some exercise and some time to think alone. I’ll see you again, but for tomorrow, it’s back to the old grindstone.
Posted by M. Fearghail at 9:35 PM 2 comments:

Russians count the seasons from the beginning of the month. For instance, winter begins on December 1st. Since the Appalachian Irishman is part Russian in heart, he adopts that practice also. Algore and his global warming crowd must be, pardon the pun, cooling their heels, since this winter has started out colder than usual.

December 5th marked the first flurries of the winter. Falling on a Sunday, the Appalachian Irishman wasn’t chained to his work desk (as he was during the wonderful snow that fell, later, on Monday, the 13th – and what a Monday the 13th that was, but I digress!) What did he do, on the 5th? Of course, he headed for his mountain, House Mountain, for the 74th time!

This first photo is from the west bluff, looking southwest. Notice the highlights in the clouds. Of course, the Appalachian Irishman had to take his traditional leak off the rock toward Knoxville! Should I name the rock Leak Rock? 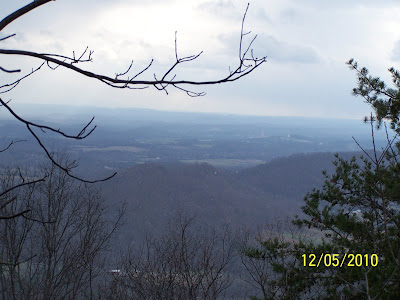 The next two photos are taken along the ridge heading west. Does the rock formation look like a dragon’s head? Looks like a good place to camp to me! 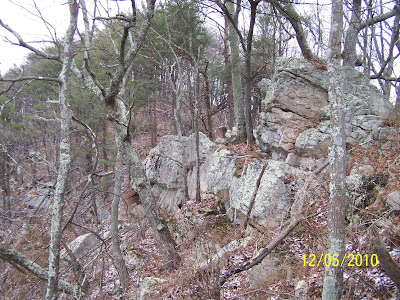 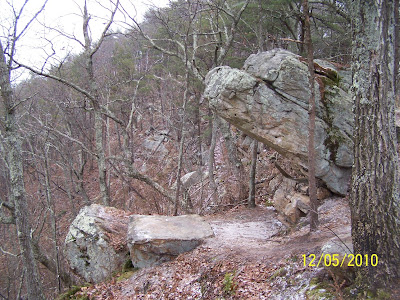 The last four photos are from the north bluff. I practiced my close up photography on a red leafy thorn and on some wild blueberries. Yes, they were ripe and delicious—the blueberries, not the thorns! 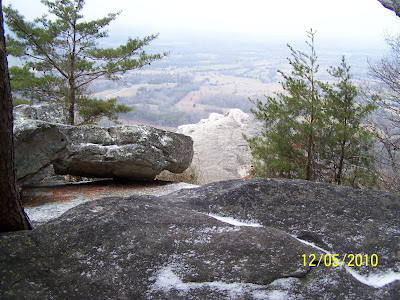 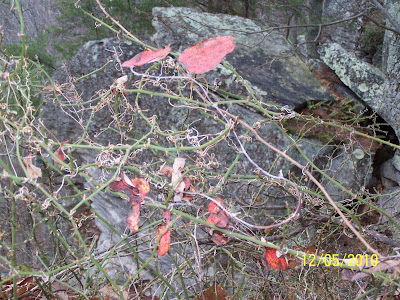 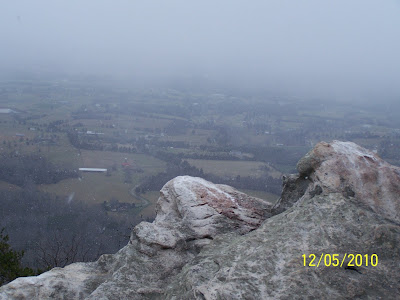 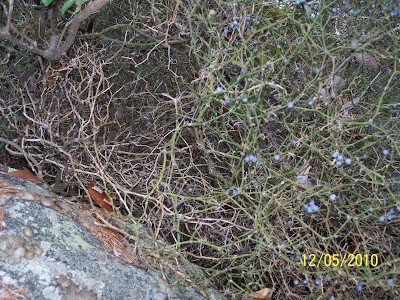