APPROACHING THE EVE OF CHRISTMAS UPDATE

Today, at sundown, is the beginning of Hanukkah, the Hebrew Festival of Lights. The Maccabean Revolt and the rededication of the second temple is a historical fact to research and read.

12/14/19, Saturday: I took Molly doggie, at 9:30 AM, for her annual physical exam, immunizations, and acquisition of more once-a-month pills (flea/tick and heartworm prevention). She is doing very well -- except for a minor yeast infection in both ears that we’d been trying to cure for a while. Her veterinarian doctor will cure it!

In the early afternoon, in on and off again rain, Mrs. Appalachian Irishman joined me, bravely, to “hunt” our first Christmas tree, since after her mother went Home, on 4/30/17. We decorated it later, but here is the photo before decorations. This is one of the best Christmas trees that I’ve ever “hunted!” I always ask the tree if it wants to be our Christmas tree. The trees, over the years, always indicate “yes.” I then cut the trees, to take them home, as Christmas trees. 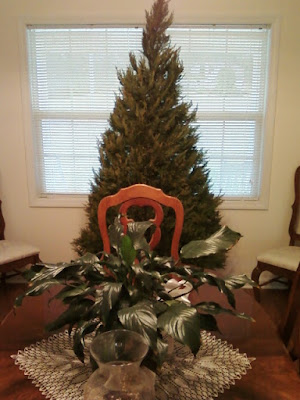 As a boy, I enjoyed “hunting” a Christmas tree in the fields and woods around our home, just off, as it was called, dead man’s curve on old Highway 11W. Later, in my teenage and young adult years, I always “hunted” Christmas trees to decorate our new homeplace. I often drove Dad’s old truck to the ancestral Ferrell homeplace, where part of the foundation to the home was still visible, to find a tree. The last tree, for many years, that I “hunted,” with Dad joining me, was for our Knoxville apartment, on Monday, 12/13/99. (We had returned from Russia, on 9/30/99.) Mom and Dad drove down to visit us that day. That was a fine memory! Of course, that was before Mom’s eventual journey Home, on 12/27/2000, which started on 12/28/1999. Mom was completely well on 12/13/99.

Well, at least Mrs. Appalachian Irishman is on her two-week Christmas (not “winter”) vacation from her teacher/vice-principal school job. I’m “burning” a few days (as I call it), on 12/23/19, 1/2/20, and 1/3/20. Us long-suffering State employees get Christmas Eve, Christmas Day, New Year’s Eve, and New Year’s Day off.

As we approach sundown, the following is a historical memory photo, from my “fun” days in 2016. 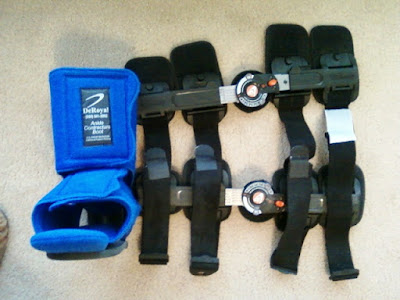 Well, Merry Christmas, y’all, for the RIGHT, TRUE meaning of the reason for the season! The Word became flesh, dwelled among us, died as our atoning sacrifice, and rose again, to return one day (soon, I hope). The divine Scheme of Redemption was accomplished -- only to await the full accomplishment by the return of Christ and the conclusion of this temporal realm.

Well, happy fear of the number 13, especially if it falls on a Friday, y’all!

Today, on the dreaded Friday, December 13, 2019, I took a day off from the bureaucratic, psychobabble, work-a-day world! I “enjoyed” the need to see my chiropractor at 10 AM. Then, at 11:30 AM, I “enjoyed” lunch at a local eatery with my work colleagues, who thought that the round trip, from work in a next-door County and back, was a great idea. (I, of course, did not, so I took a day off! I ate with them anyway.) Afterward, I got my every-four-week haircut, from my fine barber of many years. Finally, in the still pouring rain, my ‘ol truck and I got in “the barn” for the rest of the day. So, here I “sot” writing to my “millions” of readers, once again! 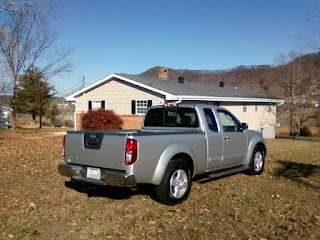 Also, on 12/7/16, I gave back the rolling walker that a good neighbor, Stan, had loaned to me. I did NOT need it ANYMORE! 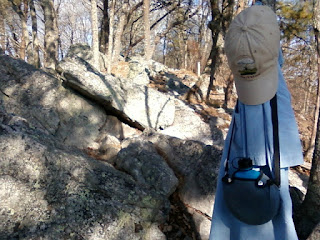 This is near the west bluff, heading back down. The view is southeast. A man has to stop to take a leak somewhere! 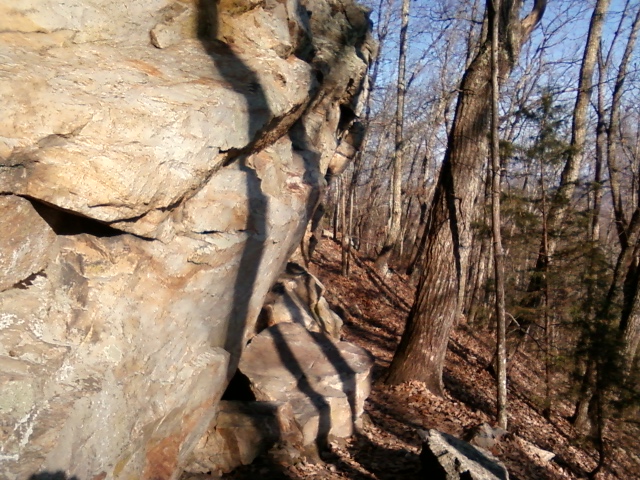 This is the below the ridge line trail, east view, heading down. 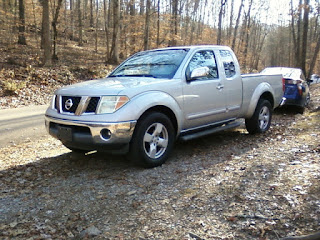 My new, ‘ol truck still looks the same! He likes to have his photo taken after these hikes!


The next day, Sunday afternoon, 12/8/19, was my House Mountain hike #163! Yes, two hikes in one weekend! It was too warm both days, but it was sunny both days. I had to get into the woods, since I still have power in my body! My spirit will always have the will. One of these days, I won’t have the power in my body, but not on that weekend! Enjoy the photos. 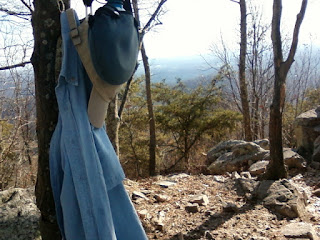 This is west bluff, looking southwest. 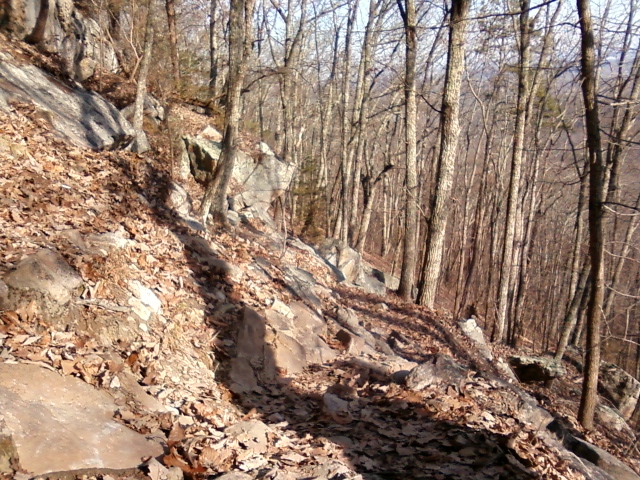 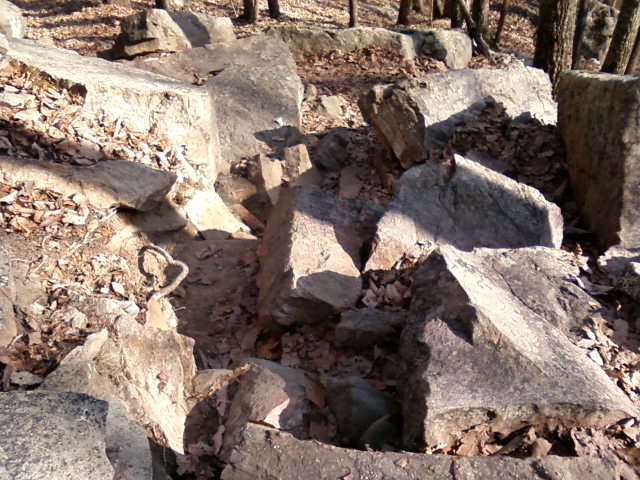 Now, this photo is from a few steps later, going down, eastward. The photo is more realistic of the challenge. Do you want to try to go down at this “gravity defying” spot? I do, every chance that I get! 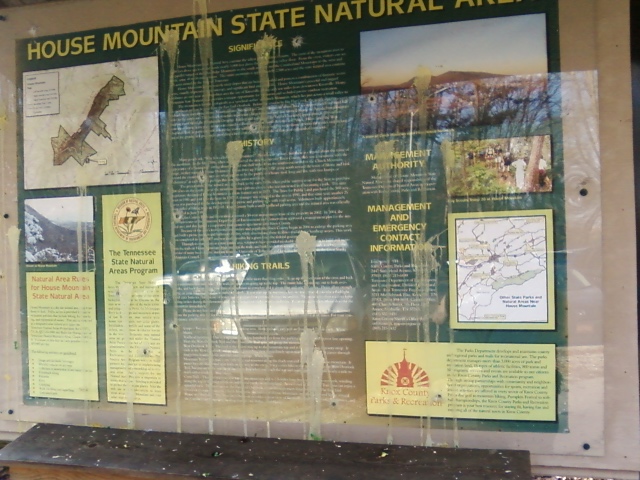 My new, ‘ol truck told me to photo the information board, instead of him, today, so I did. On the middle left is a photo that I’d taken years ago, in the snow. I was on the middle bluff. The photo looks east. A park official, years ago, when they were improving the parking area, etc., asked me to submit a few photos. She picked the one you see. My name is on the photo. I touch it after every hike. Of course, recently, some idiot or idiots shot holes in the board and shot yellow paint balls on it. I’ll hunt them down myself and “educate” them if I can! Otherwise, I am sending this photo to the State of Tennessee folks, to see if they can stop the idiot(s)! Leave my photo alone! You got paint on it, but you didn’t put a hole in it! Yes, my “Irish” is up on this one!!!!!

Well, howdy, y’all! The reason for the title will be evident later. Keep reading!

Wanderings (“Life, Such As It Was”)

Thanksgiving, Thursday, 11/28/2019: My youngest brother, his wife, and their two daughters came here for Thanksgiving dinner. They arrived a couple of hours before we ate, at noon. (Noon, by the way, is the scriptural time to eat Thanksgiving dinner. Grace extends to 1 PM, but not later!) We had a fine time together! They left a little after 3 PM. Then, Mrs. Appalachian Irishman and I drove, separately, again, as usual, to her paternal aunt’s home, for the Beckner/Gordon/in-laws Thanksgiving supper. (Ok, so if it’s Thanksgiving supper, the scriptural start time is 5 PM to 6 PM.) We ate, again, at the 5 PM scriptural time. I left a bit earlier, to get home, feed Molly doggy her supper, and to get Molly inside for the evening. We had a good time. I helped “cat-dog” be a dog out in the yard a while! For hiking, Thanksgiving was the best day to have done so. My “bionic” body, however, did not feel its oats.

Friday, 11/29/2019: on the cloudy day, I drove to the homeplace, for the first visit since summer. I did what I needed to do. After about two hours, I drove home by means of Main Street. Now, that was a great day! My youngest brother burned leaves, in his yard, so we missed each other. About 7 PM, Mrs. Appalachian Irishman and Molly doggy were both hard asleep on the couch. Mrs. Appalachian Irishman was worn out from her holiday cooking, etc. Molly was just worn out. So, what did I do? Enjoy the photo! 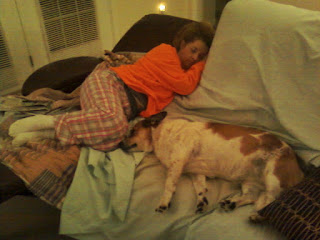 Saturday, 11/30/2019: Granny Ferrell was born this day, in 1982. Well, the overnight rain had ended by morning. The next rain hit at 2:30 PM. It lasted the rest of the day and into the night. Before the rain hit, I did the usual haul trash and get gas routine. At the dumpster, I was behind a Vietnam veteran and his granddaughter. I got out, walked to him, looked him in the eye, shook his hand, saying “thank you!” The veteran expressed his thankfulness. We “man hugged.” I had a tear well up, as I walked back to my truck. Afterward, I joined Mrs. Appalachian Irishman for a visit with her folks, five cats, and one “cat-dog.” (Don’t ask! It’s usually three cats and “cat-dog.”) Being who I am, I had to place a Band-aid on “favorite” sister-in-law’s car. (It had received its injury on 11/18/2019.) Here’s the photo! 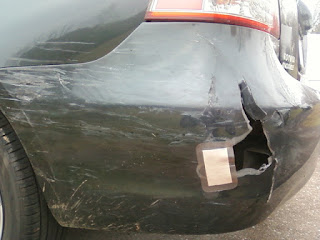 After I arrived home, being hungry, I opened and ate a can of Vienna Sausages! I had three cans. Now, I’m down to two cans. Give me a couple of years, and I’ll have the other two cans eaten!

Sunday, December 1: the rain has ended. The sun is out. The wind is blowing. The weather pattern knows that today is the first day of winter! I know it. Do you? Winter does NOT begin on 12/21/2019! That the solstice, not the start of winter!

Well, my next to youngest brother was supposed to have been here 37 minutes ago, at this mark of time, while typing. I guess that I’ll stop now, to call him, to see why he’s not here yet. He’s probably on “Ferrell time;” you see.

Tomorrow resumes the five-day, hit-a-lick, workweek. Perhaps, I’ll get House Mountain #162 on December 7th, Pearl Harbor day. 12/7/2016 was the first time, post insertion of “bionic body parts,” that I'd driven to see the homeplace, in my new, ol' truck. I must endure a work-a-day week first, before I can get to #162.

Email ThisBlogThis!Share to TwitterShare to FacebookShare to Pinterest
Labels: Life (such as it is)
Newer Posts Older Posts Home
Subscribe to: Posts (Atom)