I have a post-it note, which I dated 8/28/2003, a Thursday. I was talking with Dad by phone on that date. I'd asked Dad to please name the members of The True Light Quartet – other than Uncle Paul, who sang bass. He did, and he told me the parts that they sang. I wrote down, on the post-it note, what Dad had told me.

This article is for all the relatives of the Marion and Gertrude Ferrell line, and it honors Uncle Paul's legacy.

Memories of two aunts, five uncles, their spouses, and their children – my many cousins – abound with vivid and pleasant memories.

I don't know how many years that The True Light Quartet sang at churches and other religious gatherings – mostly in the upper-east Tennessee area, around Kingsport. I believe they started in the 1970's or before. Uncle Paul passed, on 12/4/1983, and I think that the quartet had stopped singing together before then. 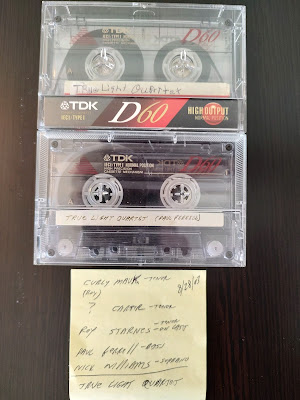 Eventually, the cassette tape original was copied to an original CD disk. (Dad knew who copied from cassette tape to CD disk, but I don't remember what Dad told me.) Dad had some of those CD copies. Dad may have given me a CD copy, but I may have lost it. My youngest brother had at least two CD copies. He gave me one of his CD copies, on 8/7/2008.

The True Light Quartet on CD

The photograph below is of the CD that my youngest brother gave me, on 8/7/2008. 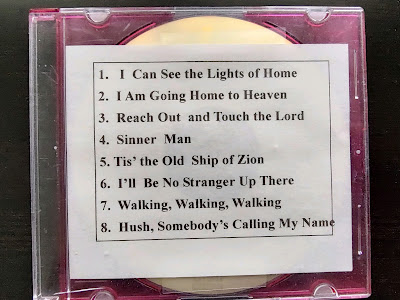 On the back of the paper that lists the eight songs, I had written “8/7/08, Thu., Doug.” I didn't photograph the CD opened. The songs are:

I Can See the Lights of Home
I Am Going Home to Heaven
Reach Out and Touch the Lord
Sinner Man
Tis' the Old Ship of Zion
I'll Be No Stranger Up There
Walking, Walking, Walking
Hush, Someone's Calling My Name

Uncle Paul's distinct bass voice is heard on each song. Dad knew every member of The True Light Quartet.

I remember Uncle Paul, aunt Lorraine Franklin Ferrell (6/28/1926 - 2/17/1996), and their three daughters (two still living). Dad had taken me to visit Uncle Paul and aunt Lorraine, around Christmas, in 1992. I think that was the last time that I saw him. Three friends and I were going to Myrtle Beach, in June of 1993. We talked about that upcoming beach trip – and many other topics. Uncle Paul passed on 12/4/1983. His music, in The True Light Quartet, still ministers in song.

I wrote the following description of that playlist:

Eight original songs, recorded, perhaps, in the 1970's or early 1980s. Paul Ferrell sang bass. He was my uncle. On 9/7/2022, I uploaded their album, from CD, to honor each member -- especially Uncle Paul. The quartet sang great sermons!

I can't figure out how to change the tracks from numbers to the song titles, which I have mentioned above. The “Popmart [Video/DVD]” came from the CD disk that I uploaded. I can't edit to correct it. Please contact me, by emailing, calling, or using my “Contact Form,” if you can't find the Playlist!

The members of The True Light Quartet, all having been sinner men, have, as far as I know, all walked to the Old Ship of Zion, touched the Lord, had their names called, seen the lights of Home, and have gone home to heaven, where they are not strangers.

By faith I see them singing as a heavenly quartet. There around them are many members of the Ferrell clan, who are listening to them. Their joy is everlasting. Won't it be wonderful, someday, to join them there?