For all my “rich, full” life, I have heard many folks in Upper East Tennessee use “there” or “here” as an extra word in a sentence or at the end of a sentence there. There are many examples here. Here are a few there:
“How do you want me to do that there?”
“What do you think about that there?”
“In all my born days, I’ve never seen that there!”
“I thought I’d give you a call there.”
“What is that there thing doing here?”
“Well, I’m just a ‘sottin’ (sitting) here.”
“Do you want some of this here pie?”
The list, as in my mind, could go on infinitely! Of course, “there” is pronounced “thar,” and “here” is pronounced “hear,” with emphasis on the “he” and a slow drag out on the “ar.”

Well, the Appalachian Irishman became interested in this here topic on yesterday there. As far I know, no one else has posted anything on this here Interweb world of fun on this here topic there. So, it is up to me to take that there bull by the horns and to wrestle it to the ground there!

Okay, so, to all you linguists out there, why do we, here in Irish-American Appalachia, use “there” and/or “here” as extra words in sentences? This here inquiring mind wants to know there!

Written by M. Fearghail at 5:47 PM No comments:

Secondly, to my American friends, as in part of the prior Russian, I love each one of you (in Christ Jesus)!

At age 59, this Appalachian Irishman, busted up as he is with “bionic” body parts, can still do almost everything that he could do, in his younger years. (I still can’t run, really run, like I could, and I’m still about five minutes slower hiking up My Mountain, slowed only by my right foot and right knee.) I am a fine tuned race car, with great engine and transmission. The frame has been damaged, so the ride is rough. The rough ride goes on, until it’s time to go home. Make it soon, dear Lord, make it soon! I’m ready to come see Mom, Dad, and so many who have gone home before me!

Written by M. Fearghail at 3:43 PM No comments: 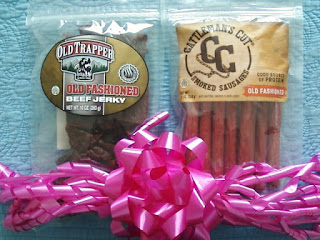 The beef jerky and smoked sausages are the way to this Appalachian Irishman’s heart, and stomach! I have a couple of bags of jerky to eat (and to share with Molly), before I can get to these, but I WILL get to these. (Molly might get a little, maybe.) “Good things come to those who wait.” Note: I receive no money from any type of product endorsement; although, I can tell that these will be delicious!

Oh, you asked about the pink ribbon? Well, via Mrs. Appalachian Irishman, I’d given another set of four wheel covers, to my “favorite” sister-in-law, for her birthday last month. (If she’d stop trying to drive on two tires, in Dukes of Hazard style, she’d not lose wheel covers so often.) I replaced the two that were missing, again, as last year! Well, as I had asked, Mrs. Appalachian Irishman wrapped the same pink ribbon around the box, in which the wheel covers came. Ok, so, “favorite” sister-in-law gave me back the same pink ribbon! Now, that’s just funny!

Mrs. Appalachian Irishman’s birthday anniversary has always been one day after mine. (I wonder: why does that never change?) It was a work-a-day for me, and it was a summer time, whatever-she-does day for her. As part of her birthday gift, she picked Fountain City Diner, for a 1 PM dinner (not lunch; I ain’t a northerner or a city slicker). To join us were, in arrival order, my next-to-youngest brother, my “favorite” sister-in-law, and her daughter. Now that was some fine eatin’ and some good, family conversation!

Oh, the diner is closing, due to greedy landlord’s far too high rent increase. That’s the way to kill a great small business, landlord. I hope you sleep well at night, not really. The economy is NOT growing, at your 56% rent increase rate.

Okay, that’s enough of that sidetrack. I am still confused. The three females looked over the pies on display. They talked about pies, but they didn’t BUY any pies! What? Can you explain why not, to me?

Addendum to yesterday’s “Corn Dog!” post: after the events described in that post, on that same day, I was on the phone with a good neighbor. Mrs. Appalachian Irishman was sitting in a kitchen chair, tapping her foot on the floor. She was itching for me to get off the phone, so she could kiss me and then, as her main priority, go to “check on” her Dad. He -- with sister-in-law and, now, again, niece, along with a “catdog” and three cats -- lives three miles away. Go, dear, go, I motioned! She jaw kissed me and rolled on, while I was still trying to wind down the call to a long-winded neighbor! Now that’s just funny!

So, what’s this mashed ‘tater war, you ask? Good! I’ll tell you! While Mrs. Appalachian Irishman was making certain, absolute certain, that her Dad was fine, as he was, my youngest brother sent me a text -- either way too late for dinner or way too early for supper -- stating that he was eating mashed potatoes and that I was not.

The challenge was on! 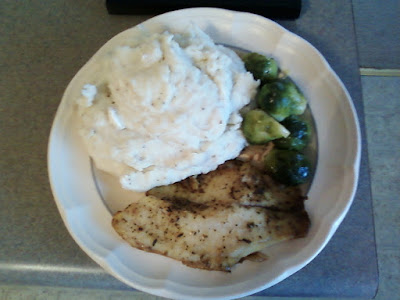 So, at the appropriate supper eating time, I took this photo of my plate, placed on an edge of the kitchen counter. Mrs. Appalachian Irishman sent my youngest brother the photo, in retaliation! Ha!

Of course, as an Appalachian Irishman, raised in Upper East Tennessee, I eat mashed potatoes almost every day! By my Irish roots, I wish that I could have some form of potatoes (i.e., hash browns, baked, mashed, etc.) at every one of my usual three meals a day!

Written by M. Fearghail at 1:52 PM No comments:

I use "Farcebook" as a way to get people to this, my "Internet backwater" blog! Ha! I might as well "return the favor." Ha!
Written by M. Fearghail at 11:09 AM No comments:


7/8-14/19, the new, improved, bigger, and better Gibbs Weigel’s is offering FREE corn dogs! We had received a flyer in the mail with a coupon! 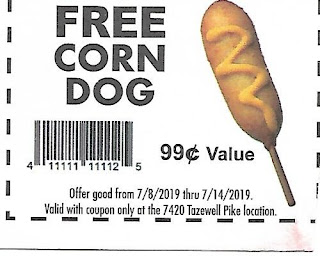 What else can an Irish American do? About 12:30 PM, Mrs. Appalachian Irishman, bravely, joined me, in the usual haul trash and get gas routine. However, this was a special day, as I was going to get me a FREE corn dog!

The storm clouds were showing. I hoped that we’d make it home, before the bottom dropped out of the clouds. Well, in typical Irish luck, after getting gas for my new ‘ol truck, we went inside, to get my FREE corn dog. While inside, the bottom dropped! Noah would have been proud! It was a typical summer tropical down pour! After a few minutes of waiting, with conversation with a man about my same age or older, I said let’s get to the house! Well, we both took a second shower for the day. Both of us were soaking wet. The rain cleaned out the inside of the cab, for my new ‘ol truck! (Of course, I wiped out all the water, after I got my truck into the “barn” (i.e., garage)! I must respect my truck!)

That was a lot of fun! (Note: this stupid website won't post in the font that I demand! Not my fault! Ha!)

Written by M. Fearghail at 6:17 PM No comments: 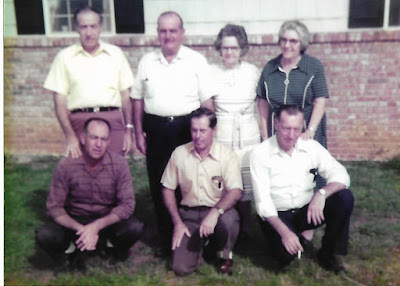 On a date, after June, in the summer of 1974, Mom, probably, took the above photo. The photo includes: Dad (lower left); his two sisters, Aunt Carrie Davis and Aunt Lula Absher (farthest on top right) – the eldest of all eight siblings; and four of his five brothers: Uncle Bill (lower right), Uncle Paul (upper left), Uncle George (center, standing), and Uncle Carson (lower center). Uncle Roy, who, with family, lived in Washington DC, was not present. 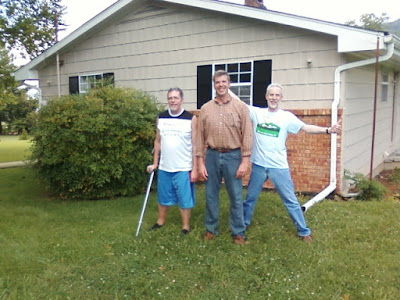 On Saturday, 7/6/2019, two of my three brothers had photos taken, on about the same spot, at the Caney Creek Road homeplace. The “long-suffering” Mrs. Appalachian Irishman took the above photo. I am the eldest of the four sons of Earl and Betty Ferrell. I’m standing on the right, wearing my House Mountain T-shirt! (Let’s hike!) My youngest brother, Doug (aka “Dougly Doright”), is in the middle. Clark (next to oldest, aka Clark “Kent”) is on the left. Arthur could not attend the gathering, due to car difficulties, as he claimed.

During the afternoon, we visited and ate outside on the front porch. A little pop up shower joined us a while. Doug and the youngsters played in the front yard. I picked up and piled branches. Everyone was in and out of the home often. Clark wanted to repeat the same photo location, with us four boys (minus Arthur). That was a grand idea, Clark! We all had a great time! 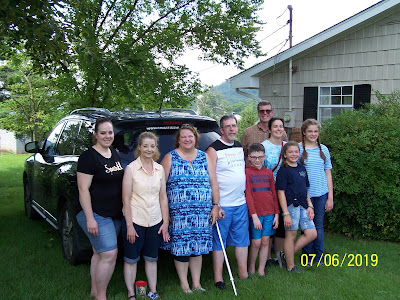 The above is an extra photo that I took! You can see Clark and Doug, two of my three brothers.

The other family are, from left to right: Shanna (Clark's younger daughter). Shanna enjoyed going through Mom’s recipe books. She found and kept her old letter to Santa. Clark's older daughter, Alisha Barnette, and family, could not attend.

Next is the “long-suffering” Mrs. Appalachian Irishman. To my wife's left is Clark’s fourth wife (on Clark's right). On Clark's left is “Uncle” Skylar (Shanna’s son). Stacy – Doug’s wife, with Doug standing behind her – is next. Finally, Doug and Stacy's girls are Lillianna (the younger) then Ariel (first born).

The vehicle is Clark’s Nissan Pathfinder. The camera view is looking northeast. The ones in the photo are looking southwest.

After Papaw died, in 1983, Granny began living with us. The grapevine continues.

I could write about many other family heritage memories, but it’s close to supper time. I hear Mrs. Appalachian Irishman finishing supper preparations. Let’s eat!

I updated the title and improved my grammar and style a little. By the way, happy birthday, today, Trina (our niece, daughter of “favorite” sister-in-law).