My, this lady at a particular state university is persistent! The Appalachian Irishman finally responded to her Tennessee Motor Oil Survey, after receiving the second letter. I might as well have some fun filling out the thing.

I’ll share some of her questions and my answers, along with my other comments. Yes, she made the mistake of allowing freelancing from my glib tongue!

One question asks what I do with the old oil after changing it in my mowers. Of the ten options, I chose “other,” stating that I pour the oil on a big rock in the yard for the sun to evaporate. I bet that’s a unique answer! Although a collection center is less than five miles from the house, the big rock does just fine. (I wonder when the Big Brother sky-spy cam will catch me and send an eco-enforcement officer to demand that I take the oil to the center, blowing up my rock in the process!)

Another question asked if I would use their so-called refined oil for an oil change. No thanks, I replied. I can’t trust the quality. When will we be forced to reuse “refined” household waste?

The most entertaining question concerned what my neighbors do with their used oil. Of the 12 options, I again selected “other,” stating slyly, “Big Brother should not spy on his neighbor’s preference on disposal of used motor oil.”

I could not resist the opportunity, on the race or ethnicity question, to write in, beside White, “Irish American.” Why not? African American, American Indian or Alaska Native, and Native Hawaiian were other options.

And now, dear reader, let’s move on to my other comments. I wrote:


I have responded to your survey finally, after receiving your second letter. I just don’t want you to show up at my doorstep next, with clipboard in hand.

Why did you send the survey in English and Spanish? We are not, yet at least, a bilingual country officially. I went to Russia and learned Russian. Those who come here by legal or illegal means should learn English. Eta pravilna?

I replied to the survey, despite my misgivings regarding its hidden agenda. I suspect that your survey will be used to promote legislation requiring used oil to be recycled, disallowing the option to use fresh oil, and to create intrusive regulations on personal disposal of used oil – all for ecological purposes.

I am a conservationist, not an environmentalist. We should care for the environment, but we must not worship the creation over the Creator.

Just don’t track me down and take away my big rock!


Are my comments on oil slick, or what? What say you? 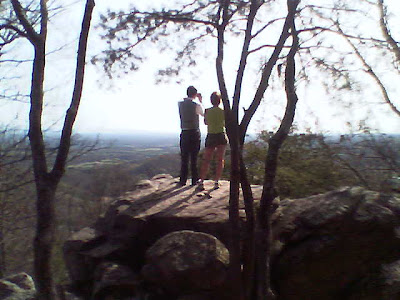 The Appalachian Irishman hiked his beloved House Mountain, for the 55th time, on Easter Sunday. (The last hike was almost five months ago, so the trek was long overdue!)

The Appalachian Irishman has met a few interesting people on the trail. Often, he meets folks who “aren’t from around here,” either by geography or by mindset, who bring all the professional hiking gear. You know – the fold up metal hiking sticks, the high dollar packs, the costly hiking attire. The Appalachian Irishman usually snickers, after a brief conversation, as he continues on the trail, in his beat up blue jeans, old shirt and cap, carrying his “old school” quart canteen and Army surplus gas mask container, which contains his few essentials (e.g., beef jerky, toilet paper, lighter, first aid kit, snake bite kit, etc.). The brief conversations with these folks are entertaining. The vehicles they drive are easily identified in the parking lot. They usually drive a Subaru, fully equipped with the mandatory liberal, politically correct, tree lover bumper stickers.

Well, on Easter Sunday, I saw the best-dressed hiker ever – in my entire life of hiking! A young man with an older lady, perhaps his mother, came across the ridge from the east to the west bluff, just after I arrived, having come up the west trail. I was shocked, shocked, to see the young man dressed in black dress shoes (of course, quite dusty from the hike), gray-stripped dress pants and matching vest, white dress shirt, and light blue necktie, still neatly tied! For once, I was – almost – speechless. After a brief exchange of pleasantries, I allowed them to enjoy the view from the rock ledge.

Not being able to subjugate my mischievous side, and before continuing across the ridge eastward, I had to, just had to, remark, “Young man, I must say in my 55 hikes on this mountain, you are the best dressed hiker that I have ever seen.” The young man wasn’t sure how to take my remark at first. I paused, awaiting his reply and giving him a little smile. He retorted sincerely, “Thank you.”

As I turned to continue across the ridge eastward, I could hear the older lady, who had walked a few feet around the ledge toward the west trail below, laugh aloud delightfully. My smile broadened. It was another proud moment in the hiking history of the Appalachian Irishman. Enjoy the photo of the young man, which I took by stealth.

Lesson to all Easter Sunday hikers: Change your Sunday-go-to-meetin’ clothes before the hike! Otherwise, folks will laugh at you, as they laughed at Mr. Douglas, riding his tractor in suit and tie. (Please don’t tell me that you don’t remember the 1960s TV show Green Acres!)

Written by M. Fearghail at 9:58 PM No comments: