I wish that my voice carried the same eloquence as Paul Harvey. Read and listen to the words. The words are what matters.

If I were the devil, I would lie that society decides what is right and wrong. What is right may become wrong, and what is wrong may become right. There are no absolutes – except that nothing is absolute.

If I were the devil, I'd teach the majority to worship the creation, or the government, or both – not the Creator. I would deceive them to economic then national destruction – to “save the planet.” They would worship the sun – not the Son.

If I were the devil, I would destroy the traditional family. I've been doing a good job. Children would turn in their parents, or their grandparents, to the authorities. Grandparents would have to raise their grandchildren. I already have most of the parents.

If I were the devil, I'd confuse male and female. How a man or woman, or a boy or girl, “feels” is his or her gender. I would change the definition of marriage, to be anything I wanted it to be.

If I were the devil, I would keep inflation hot. I'd print worthless money and increase national debt. I'd give out handouts. I'd keep exports low and imports high. I would make a rich nation a beggar – for money, for oil, for products – to a rising nation. I've already made Mandarin a hard language to learn.

If I were the devil, I would open the border wider – for all illegals to cross. Bring in all, who yearn for handouts, bus rides, cell phones, and places to live! Bring in terrorists, stalkers, rapists, criminals, murderers!

If I were the devil, the man of lawlessness, I would destroy civil society. My evil children would commit all kinds of wickedness, to honor me. The blind would blame the vehicle, the gun, the knife, or the weapon of choice – instead of how my disciples use those tools.

If I were the devil, I would ridicule the founding fathers and their documented principles. I would ridicule them – not for their principles -- but due to their vices. After all, a man with vices can do nothing virtuous! I would re-write the nation's history and indoctrinate the children in socialist schools. I would “cancel” anyone, who stood against me.

If I were the devil, I'd just keep doing what he's doing – to take the majority to Hell with him.

Wake up (not woke up), America! Do not go to the devil! Turn to the Lord! I have spoken.

Paul Harvey's wisdom still speaks. Please click the link, above, and listen to his ageless eloquence, in his distinct voice.

Paul Harvey's 10/13/1964 newspaper column, “If I Were the Devil I Would Pray, Our Father Who Art in Washington,” is in “The Gadsden Times,” in Gadsden, Alabama. The link to his column is at Google News Archive Search, The Gadsden Times, 10/13/1964, page 4. (It is easier to read.) The following is my download of that link. 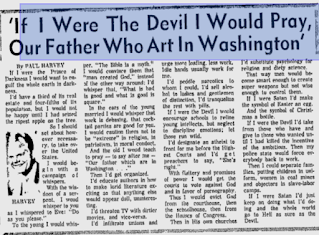 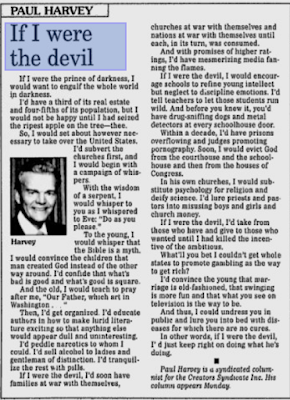 Paul Harvey revised his original newspaper column. He adapted his original column in his radio broadcast. Paul Harvey's wisdom still speaks. His wisdom inspired my written and verbal words, with the same title.

The inspired apostle Paul wrote the following, to the Christians at Thessalonica, at Colossae, and at Rome. I emboldened certain phrases and sentences, for emphasis.

Concerning the coming of our Lord Jesus Christ and our being gathered to him, we ask you, brothers and sisters, not to become easily unsettled or alarmed by the teaching allegedly from us – whether by a prophecy or by word of mouth or by letter – asserting that the day of the Lord has already come. Don’t let anyone deceive you in any way, for that day will not come until the rebellion occurs and the man of lawlessness is revealed, the man doomed to destruction. He will oppose and will exalt himself over everything that is called God or is worshiped, so that he sets himself up in God’s temple, proclaiming himself to be God.

Don’t you remember that when I was with you I used to tell you these things? And now you know what is holding him back, so that he may be revealed at the proper time. For the secret power of lawlessness is already at work; but the one who now holds it back will continue to do so till he is taken out of the way. And then the lawless one will be revealed, whom the Lord Jesus will overthrow with the breath of his mouth and destroy by the splendor of his coming. The coming of the lawless one will be in accordance with how Satan works. He will use all sorts of displays of power through signs and wonders that serve the lie, and all the ways that wickedness deceives those who are perishing. They perish because they refused to love the truth and so be saved. For this reason God sends them a powerful delusion so that they will believe the lie and so that all will be condemned who have not believed the truth but have delighted in wickedness.

But we ought always to thank God for you, brothers and sisters loved by the Lord, because God chose you as firstfruits to be saved through the sanctifying work of the Spirit and through belief in the truth. He called you to this through our gospel, that you might share in the glory of our Lord Jesus Christ.

So then, brothers and sisters, stand firm and hold fast to the teachings we passed on to you, whether by word of mouth or by letter. May our Lord Jesus Christ himself and God our Father, who loved us and by his grace gave us eternal encouragement and good hope, encourage your hearts and strengthen you in every good deed and word. (2 Thess. 2:1-17, the entire chapter, NIV)

So then, just as you received Christ Jesus as Lord, continue to live your lives in him, rooted and built up in him, strengthened in the faith as you were taught, and overflowing with thankfulness.

See to it that no one takes you captive through hollow and deceptive philosophy, which depends on human tradition and the elemental spiritual forces of this world rather than on Christ. (Colossians 2:6-8, NIV)

Do not conform to the pattern of this world, but be transformed by the renewing of your mind. Then you will be able to test and approve what God’s will is—his good, pleasing and perfect will. (Romans 12:2, NIV)

Wake up, America – before it's too late!

As of 9/10/2022, Saturday, analytics shows 298 views of this article, so far. Folks are reading but not commenting. My written, and spoken, “If I Were the Devil” remarks are being heard. I wonder if folks are listening. I hope so. I have tried!