Devil’s Nose, in Hawkins County, Tennessee, is the highest peak in the county. How it is named? I have heard two stories: from the east, the mountain looks like a crooked nose coming out of the ground. The other story is that someone got lost on the mountain and never returned. Someone asked, “Where is he?” The family answered, “Only the devil knows.”

The Appalachian Irishman has hiked Devil’s Nose since his high school days. The uncle of a friend owned property at the southwest base of the mountain. We boys would hike up “the Nose” from his property. Later owners still allow us to hike from the same property. In 2002, I began keeping record of my usual annual hikes up “the Nose.”

In recent years, only my youngest brother has been brave enough to venture up “the Nose” with me. The following are photos from our 11/29/2013 hike.

The first two are of my brother and me at what he calls “the Samson Rock.” This is a rock formation as we hike up the southwest side. 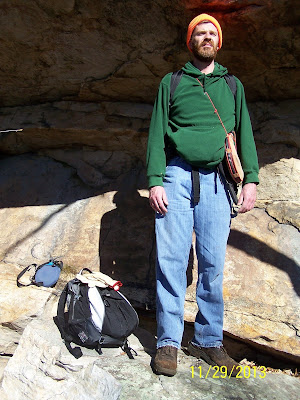 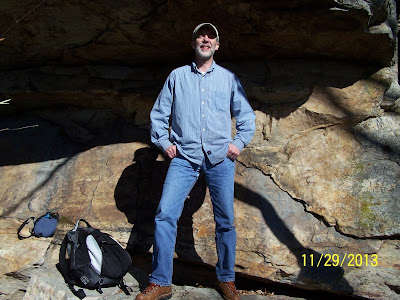 The next photo is of my youngest brother climbing in his favorite tree on the ridge, heading east. He likes to have his photo taken in this tree every year! 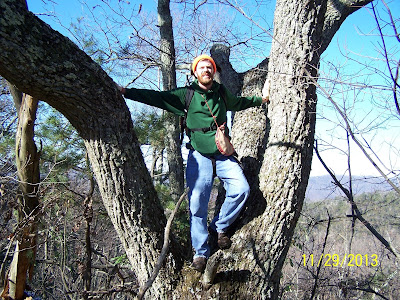 It had snowed the day before, on Thanksgiving, and snow was still on the ground on the ridge and on the north side of the mountain. We found fox and bobcat tracks on the ridge. The next photo looks like fox tracks. 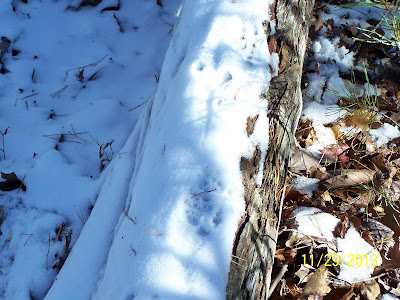 This next photo looks like a set of bobcat tracks. 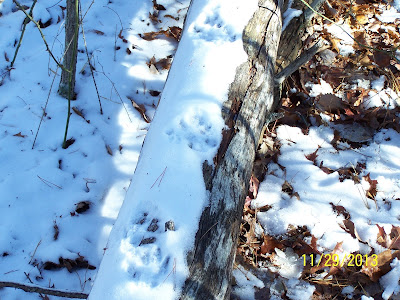 The next two photos are heading east on the ridge. This is the first time that I can remember hiking with snow on the mountain. 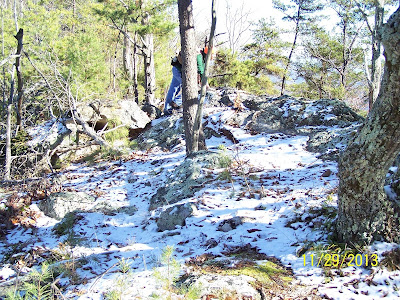 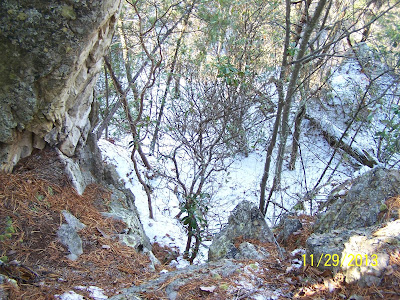 The next three photos are taken from the east bluff, looking south and southeast. A group of four hikers came up the treacherous east side, using rope and hooks, while we were on the bluff.One was a nine-year-old girl, who is the great granddaughter of my uncle Carson and aunt Hazel Ferrell! (Can you figure out how she and I are related exactly?) This young girl certainly has some Appalachian Irishman blood in her! 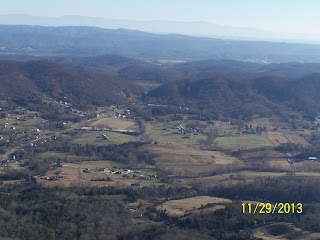 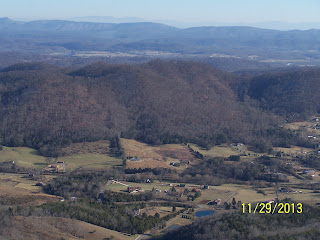 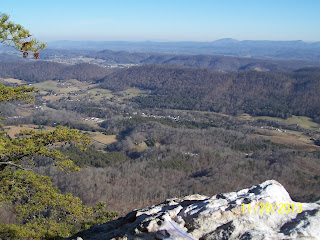 The next two photos are the traditional “standing on the bluff” photos of my youngest brother and me. 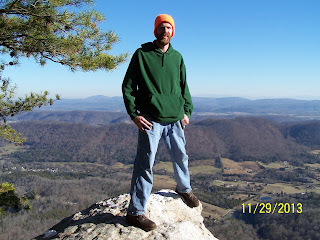 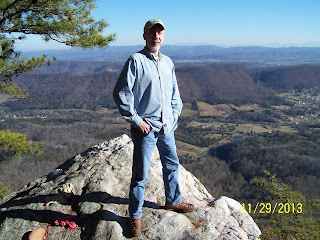 Lord willing, I want to hike Devil’s Nose every year, the Friday or Saturday after Thanksgiving, as a memorial to my mother, whose birthday was on November 24th, 1932.

Thanks for your blog! I bumped into it while looking up local hikes. I don't get into the outdoors as much as I would like, because of time issues. House Mountain looks to be a very convenient respite; I live in south Knox County. I appreciate your other posts too, I think we are somewhat like minded. Here are two blogs I have . . tinkered with, would be the most apt description.

Nice piece and pics. One correction, though, Devil's Nose is not the highest point in Hawkins County. That honor goes to Chimney Top Mountain. Chimney Top's elevation is around 3,100 feet. It is a few miles Northeast of Devil's Nose in Beech Creek. Devil's Nose is closer to 2,300 feet. There are several peaks along the same ridge as Chimney Top that approach 3,000 feet, including Fodderstack Mountain.

From the backwaters of the Internet, my blog had a hit! Thank you, Shane, for “dropping by.” I visited your blog. Your cover photo is well taken. Where is the location?

To the point of Devil’s Nose elevation, your comment got me to pondering. So, I found https://listsofjohn.com. Plugging in Hawkins County, Tennessee, I discovered that, in elevation, Chimney Top takes first place, at 3,118 feet. Devil’s Nose ties for eighth in elevation. When the saddle of a mountain, however, is considered, Devil’s Nose takes first place, at 2,390 feet. Chimney Top saddle is only 1,370 feet, lower than other mountains, including Devil’s Nose. Of course, being a Hawkins County native, I know exactly where Chimney Top is located.
I have always heard, from generations gone by, that Devil’s Nose was the highest peak in Hawkins County. I recon that they meant highest saddle peak. It is a mundane point, since the view, from any high mountain, is worth the hike!

As an important by the way, my paternal grandfather, whose first name I was given, was born on this exact date, in 1880! Happy hiking, sir!

I live in Knoxville Tenn.Iwant to hike Devils nose.when i turn on devils nose rd how far is the traihead is it marked. Any info appreciated. Ken Palmer.7

You need to know someone, to ask permission to hike up Devil's Nose. You make your own trail. No "trailheads." It's rough hiking. Might want to go with someone who has done it before. Don't go alone!