Early this morning, while performing my routine fecal plowing, I was listening to News Talk 98.7 FM, on one of the three radios, on my bathroom sink counter top. A news item – aside from shootings in other states reported as “local” news – that caught my attention was that the final day to vote, in TDOT's name a snowplow contest, is today.

Several days ago, a local TV station had mentioned this contest. I had flushed the thought, after wondering why TDOT would waste “toilet paper” money on such a silly contest. Well, the thought “back flushed” into my mind.

After my morning fecal plowing, I found, on TN TDOT Department of Transportation, “Name A Snowplow Contest: Voting Begins.” (The “A” should not be capitalized.) 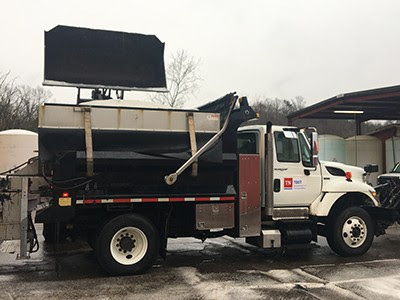 One of three photographs from “Name A Snowplow Contest: Voting Begins.”

Vote for your favorite Snowplow name. Simply check the circle beside the name you like best and hit submit. Voting ends Friday, December 30 at 4:30 p.m. The top four names with the most votes will be displayed on four different snowplows – one in each region. The winners will be announced in early January.

Thank you for your submission. A TDOT representative will contact the contest winners.

The website does not state how the 25 candidates were certified or who the contestants are. I suspect a “TDOT deep-state conspiracy!”

After seconds of “deep contemplation,” I voted for “No More, Mr. Ice Guy!” – twice. I reloaded the website. What do you know? The website allowed me to vote often! Since I hadn't voted early, I decided to vote again. So, I voted once more for “No More, Mr. Ice Guy!” I decided that two votes were enough. Of course, I could have continued to reload the website and to vote far more often, until 4:30 PM, but I have better ways to occupy my time.

Of course, I have several questions. Is this the primary or general election? When did voting start? (I voted twice on the last day to vote.) Should voting have been allowed on one day only? Are only Tennessee citizens allowed to vote? Are illegal aliens or citizens in other states, or nations, allowed to vote? (I did not have to present a voter registration card.) Does voting end today at 4:30 PM Central Time or Eastern Time? Was there early voting, before the unknown day that voting started? If so, what were the early voting numbers? What about paper ballots? When will the votes be counted? Who will count the votes? Are they certified to count them? Will there be a recount? What about a tie? Will there be a runoff? What about hanging Internet chad? Will you fine or arrest me, since I voted twice? These are several questions that come to mind.

Should I email TDOT.Comments@tn.gov, with a link to this article? If I do and get a reply, then I will mention it in a comment. As a public service, I encourage my readers in Tennessee to vote early and often! Today is the last day to vote. Readers in other states or nations, of course, are free to decide to vote or not, based on their own convictions.

Mom, of course, would understand why I wrote this humorous article, laced with sorrow, today. Mom enjoyed my sense of humor. Perhaps, once I join Mom, and so many others, in heaven, I'll share this story with her. I will have plenty of time to do so.