Over the years, I have enjoyed several trips to Clingman's Dome, in the Great Smoky Mountains National Park. Mom and Dad took us boys there. I think that I took a girlfriend or two there. I've been there alone and with family and friends. 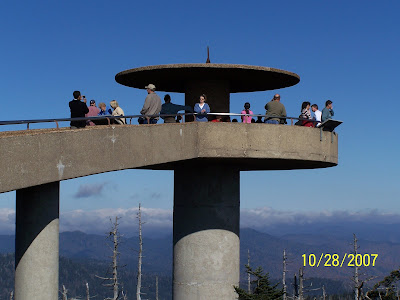 The Great Smoky Mountains National Park website has an article on “Clingman[']s Dome.” Y'all might want to check out the article.

I must correct the common grammatical error! It is “Clingman's Dome” – not “Clingmans Dome!” The apostrophe needs to come before the 's' – as I will explain momentarily!

Clingman's Dome Could Be Renamed “Kuwahi”

The Eastern Band of Cherokee Indians, a sovereign nation, may petition the USSA federal government, to return the original Cherokee name “Kuwahi” to Clingman's Dome. I heard this the other day, on the local TV news. Of several sources, I have selected, for this article, TheSmokies.com post, “Clingman[']s Dome may soon receive a new name; what you should know,” by John Gullion, updated 7/8/2022. The Tribal Council considers the petition today (7/14/2022).

“Kuwahi” means “Mulberry Place,” in English. Kuwahi has historical significance to the Cherokee people. I suggest that you read the article that I have referenced. The Cherokee people, as a larger nation, had lived in the land for centuries. The Eastern Band of Cherokees, as a much smaller nation, still lives there.

The federal government forced the native Cherokee people off their land – in the Trail of Tears (1830 - 1850). In my bookcase, I have the book, by John Ehle (12/13/1925 - 3/24/2018), “Trail of Tears: The Rise and Fall of the Cherokee Nation,” published in 1988. I bought and read the book years ago. The moral failure of this once great nation to the Cherokee people is profoundly sad, as an understatement. The ideal principal, in the Pledge of Allegiance, of “liberty and justice for all,” failed the Cherokee nation. Settlers took over their land – for about a hundred years.

By the way, I happened to find, at Social History for Every Classroom (SHEC), an interesting letter of 3/7/1934. See “Anonymous, 'A Citizen Claims the New Deal is a Path Towards Socialism,' SHEC: Resources for Teachers.” New Deal socialism concerned that writer, eighty-eight years ago. That concern has been ongoing. Dad and Mom were children, in 1934.

The creation of the park forced the settlers -- whose ancestors had taken the land from the Cherokee -- off their land. The “greater good” paid those folks a little money – even if they didn't want to sell – to get them off their land. This was another moral failure in American history – from the stand point of “liberty and justice for all.”

The land has changed hands three times: the Cherokee, to the settlers, to the USSA government. In the current “woke” (whatever that is) culture, names are changing, monuments are coming down, and history is being rewritten. I understand why the Eastern Band of Cherokee wants to rename Clingman's Dome to Kuwahi. (See my next section.)

The North Carolina History Project article, “Thomas Clingman (1812 – 1897),” written by Jonathan Martin, details the life of Thomas Clingman, after whom Clingman's Dome was named. (That's why “Clingman's” is correct, not “Clingmans.”) Clingman was a Democrat, who served in the United States Senate, from 1858 until 1861. He thought, in error, that one man could own another (slavery). He held the rank of colonel in the Confederate Army, during the War Between the States.

I had never known the story behind the naming of Clingman's Dome mountain, until I learned – a few days ago – that the the Eastern Band of Cherokee wants to rename Clingman's Dome to Kuwahi. Again, I understand why they want to rename their ancestral mountain.

I thought that I would learn how Knox County, Tennessee, got its name – along with the city of Knoxville. I did the research.

From City of Knoxville, “Fun Facts About Knoxville,” I learned:

Indians were the first settlers of Knoxville and East Tennessee. By the time the first European settlers appeared, the Cherokees dominated the region.

Who was Henry Knox? US History includes “Historic Valley Forge, Who Served Here? General Henry Knox: Page 2,” which states, in part, as follows (with my bold yellow highlighting added):

Knox was elected Secretary at War by Congress in 1785, and in 1789 he was appointed Secretary of War in President Washington's new cabinet.

Conflicts with various groups of Native peoples primarily occupied Knox in his role as Secretary of War. Knox oversaw a government policy of steady removal of native people, including the Creek and Cherokee, from their traditional lands.

The Cherokee people did not receive “liberty and justice for all” – due to Henry Knox (and others, as I am sure). My further research found that the general area, of and around Knoxville and Knox County, was a hunting ground for the Cherokee people. See The Knoxville Focus archived article, by Mike Steely and City of Knoxville, “History of the City.”

After all, my ancestry is predominately Irish, and I know the oppression that the Irish endured, by the British Empire and as immigrants to America. (See, for example, my March 10, 2021 and January 30, 2022 articles.) I don't like “the fighting Irish” as the nickname for the University of Notre Dame football team – even if the name may signify a positive meaning!

It is the choice of my readers, to determine if I write this article in sarcastic humor or seriously. The Irish in me doesn't even know! Perhaps I write with both sarcasm and seriousness. Go woke or go broke! Y'all figure it out.

If the USSA government decides to rename Clingman's Dome to Kuwahi – as the USSA demise into “Socialist Utopian Oblivion” continues – then I won't mind saying “Kuwahi.” Please, however, forgive me, if my slip of the tongue says “Clingman's Dome!” I would not want to be “canceled!” The Irish in me would like to see anyone try to “cancel” me!

Wake up (not “woke up”), America! Return to the principals of the founding fathers – which are based on the biblical worldview! Stand on the Rock. All other ground is sinking sand.

I have finished and published my sermon finally. Do I hear an amen? I am still thinking about doing a podcast sermon – audio and video.