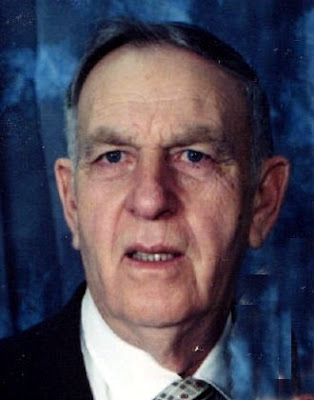 That hike up the west trail was four minutes slower than my best time (as of 2013). It was my first hike of the fall, winter, and spring hiking season. I could have hiked up faster, but the sixteen people, whom I passed while hiking up, had slowed me down! They were mostly couples, in their 30's, with children. I also passed a few college students, in their early 20's.

I had taken the photograph, below, on 9/15/2013, at 3:41 PM – after I'd already hiked up the west trail, to the west bluff. The photograph is of the new sign (at the time) on the ridge trail. The sign states details of House Mountain and the “Crest Trail” (or ridge trail), and it honors John Evans, a man who did much work on the park. I'd not seen the sign before that 9/15/2013 hike. I've seen it many times since then. 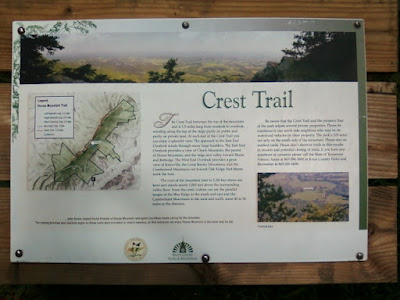 I had taken the photograph, below, on 9/15/2013, at 3:58 PM. As I recall, I had continued east, across the ridge, to the middle bluff, then down the east trail. The image is looking northeast, from the middle bluff. As I recall, the weather was a little too warm and muggy, but it was a good enough day for my first hike of the hiking season. Enjoy the view, of nine years ago! The view has remained about the same. 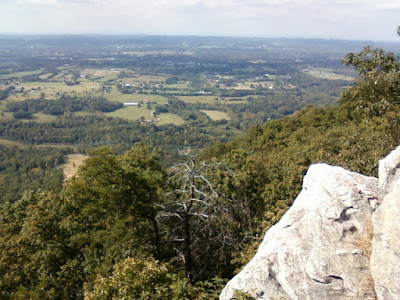 After that hike, I had contact with two first cousins. We had planned a hike at Laurel Run Park (in Hawkins County, Tennessee) for later than month or in October. We'd planned to invite other family, to hike with us. Sadly, our hiking plans were not realized. Cousin Retha (9/7/1959 - 4/27/2017) has since passed on.

My hiking log includes the last time that Dad and I hiked together. He'd taken me hiking to the Clinch Mountain fire tower, at times, when I was a boy.

On 11/3/2001, Saturday, Dad (age 74), Mrs. Appalachian Irishman, my youngest brother and his wife, and I hiked to the home site location of James Robert Ferrell (1851 - 1926). James (or Jim) Ferrell was my paternal great grandfather, Dad's grandfather. Great Papaw Jim Ferrell and his wife, Elizabeth Presley Ferrell (1856 - 1900), has ten children. (The details are in family records, which I have.)

I have film photographs of that hike, but I'll not try to find and digitize them today. I may do so, for a future article. Mom (Betty Lou Wood Ferrell, 11/24/1932 - 12/27/2000) had already gone to see Jesus. Dad's heart trouble would not show up, until December of 2002. He could still hike the mostly level ground very well. We saw the remains of the old Jim Ferrell home site The house had been gone for decades, but the foundation was still noticeable. I remember several shade and apple trees. That home site had been in a good location, on good farm land.

I wonder if any cousins may want to arrange a hike back to the old Jim Ferrell home site. We'd need permission from the current owner. What do you say, cousins? Should we plan a hike? I'm in!

Hey, Dad! Happy birthday today! I know that Mom and you are enjoying perfect hiking weather, in heaven! Please tell Mom and all the family there howdy from me! I'll see y'all up there eventually. We'll hike – and have so many other great joys – together everlastingly!

By the way, my Georgia Bulldogs will defeat the South Carolina “Game Chickens.” At halftime, my 'Dawgs are up 24 to 0. If we were together, watching the game on TV, you would pull for the “Game Chickens” – just to “devil” me! I know. I hear you!

The Ferrell home site foundation is still noticeable. It is secure in the heart and mind.