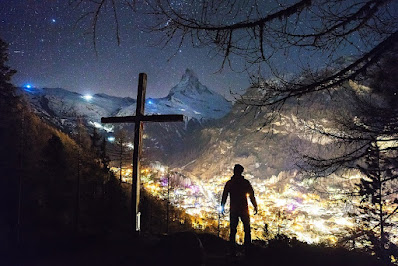 4/7/2017 Photo by Joshua Earle on Unsplash. Free to use under the Unsplash License

Greetings, dear reader! This is my second article on Christian Evidences (in Topic Sections). My first article, on 10/28/2022, introduced the topic series and explained my purpose for writing it.

This article is the first answer – of three answers – to the question: Does God exist? I will affirm the moral argument for the existence of God.

Please note that each of the three answers will prove – independently – that God exists. One line of proof is sufficient. We have three lines of proof.

Is your mind engaged? Get ready! Here we go!

What is a Syllogism?

First, I must describe my line of reasoning. It's called a “syllogism.” (Some people, in humor, say “silly-gism.”) The word “syllogism” is transliterated from Greek (συλλογισμός). It means logical reasoning or thinking about something in a sensible manner. Growing up, my parents taught me how to think right. In college, I sat at the feet of scholars, who taught me valid and sound reasoning in formal logic. I have studied the topic since college. Sound reasoning should be common sense.

The Merriam-Webster Dictionary defines and examples syllogism as:

1: a deductive scheme of a formal argument consisting of a major and a minor premise and a conclusion (as in "every virtue is laudable; kindness is a virtue; therefore kindness is laudable").

As I had stated in my first article:

The argument is valid, but is is sound? Let's set about to prove the argument. First, I must define my terms. Each definition is based on the Merriam-Webster Dictionary.

– Absolute: “fundamental, ultimate,” as in “absolute knowledge;” “Self-sufficient,” as in “an absolute term in logic.”

– Moral law: “a general rule of right living, especially: such a rule or group of rules conceived as universal and unchanging and as having the sanction of God's will, of conscience, of man's moral nature, or of natural justice as revealed to human reason.”

– Morality: “a doctrine or system of moral conduct.”

– Divine: “being a deity.” Deity is “essential nature of a god.”

Absolute truth exists. It is self-evident. For example, one plus one always (absolutely) equals two. That mathematical truth can never be changed.

Does absolute moral law exist? Yes, it does. The following is how anyone should know that moral law is absolute.

Consider first, if God does not exist, then humans are composed of matter only. There is no human soul. Matter (in particular, the complex molecular structure that defines us as human) is all that exists. We are as programmed computers. If so, we have no “system of moral conduct” – no “right” or “wrong” – unless we write the “moral code” into our soulless, “computerized” programming.

Unfortunately, some humans (as soulless, complex computers, if God does not exist) program themselves to accept and promote deceit, theft, arson, vandalism, rape, murder, and a host of other unpleasant and harmful behaviors – as moral and good. Crimes (grave offenses against morality) are rampant. The news media inform us daily. Many who read this article – if not every reader – and I have been victims of various crimes.

In this scenario, there is no absolute good or right. There is no absolute evil or wrong. Society would determine right and wrong. Society could change its mind. Societies, of course, have and are changing their minds. For example, societies once condemned as wrong the practice of homosexuality. Today, however, many societies have decided that the practice of homosexuality is right – and that anyone who thinks that it is wrong is, himself, wrong.

Consider next, can one nation (or group of nations) judge the moral conduct of another nation (or nations), and if so, how? I will cite the classic example.

The Nazis were absolutely wrong (committed absolute evil) by murdering six million Jews. The Nazis had decided that to murder the Jews (in the Holocaust) was morally right. The Allies (including the nations of Great Britain, France, the Soviet Union, and the United States) judged otherwise. World War II resulted in the defeat of the Nazis (and the Empire of Japan). The Allied nations formed The United Nations (UN), after World War II, to prevent another world war.

One nation (or group of nations) can and has judged the moral conduct of another nation (or nations), by historical evidence. The Nuremberg Trials argued that a “higher law” condemned the Nazi atrocities. Did the Allied nations (the majority) decide, subjectively, that the Nazis (the minority) were wrong? Of course not. The “higher law” guided their decision. What is this “higher law?”

Consider, finally, that innately (since birth) in each person is a conscience (which can be corrupted). Innately, we come to know that evil – deceit, theft, arson, vandalism, rape, murder, and a host of other unpleasant and harmful behaviors – is wrong. We come to know that good – honesty, love, sharing, helpfulness, respect, and many other pleasant and positive behaviors – is right.

Humans are not composed of matter only. We are not merely complex computers that evolved, without souls, that developed societies, which developed a subjective moral code. The human conscience (or soul) knows innately right and wrong (unless it chooses to corrupt itself). The minor premise is valid. Absolute moral law (innately, in the human conscience) exists.

Since absolute moral law (morality) exists (innately, in the human conscience), then it must emanate from a higher being, who has existed before (in time) and above (in power) human societies and nations.

That “higher being” – who existed before (in time) and above (in power) human societies and nations – is called God, the Divine Lawgiver. The argument is sound. I have proved it.

The atheist quibble fails to understand that absolute morality flows from the very essence of God. It emanates from God. It is His nature. God does not change his nature.

Our imaginary street light now has one strong pole to support it. The moral argument, by itself, proves that God exists.

We have two more poles to build – the teleological and cosmological arguments that each, alone, will also prove that God exists. This article, however, is enough “pole building” for today.

Of making many books there is no end, and much study wearies the body. Now all has been heard; here is the conclusion of the matter: Fear God and keep his commandments, for this is the duty of all mankind. For God will bring every deed into judgment, including every hidden thing, whether it is good or evil. (Ecclesiastes 12:12-14, NIV)

The literal translation of “this is the duty of all mankind” is "this is the whole of mankind" – as in the single purpose of mankind.

The study of this article, dear reader, may have made you weary. Be refreshed! Stretch. Take a relaxing walk outside. Get up and move!

In reverential fear, by grace, follow and serve God. He does not require perfection, only faithfulness. God will reward your duty, on Judgment Day.