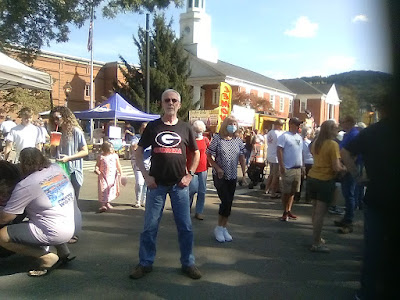 The weather yesterday (Saturday, 11/5/2022) was T-shirt warm, cloudy, and rainy off and on. Bravely, I donned the same Georgia T-shirt, as in the photograph. My outdoor activity included hauling trash and recycling. A few folks saw me wearing my Georgia T-shirt. No one commented. Afterward, before the game, I talked briefly with folks outside, in a next door neighbor's yard. They were having a “yard sale.” (I offered to buy their yard, but they were only selling the stuff that was in their yard.) One tall and wiry feller, who looked to be about my age, “warned” that he'd get his shotgun out of his van, to “shoot” me! We had a little fun. They know that Tennessee is still my second favorite college football team.

Mrs. Appalachian Irishman had shopped for groceries and household items. She'd visited with her folks, nearby. She returned home – just after the game had started, at 3:30 PM (“govrmint” time).

Before the game, the college football top three rankings were as follows, through games played as of Saturday, 10/29/2022.

Georgia continued to be ranked #1 in both polls – appropriately.

As a side note, on Saturday, 10/29/2022, my wife and I had taken our '12 Nissan Sentra (her car) and our '06 Nissan Frontier (my truck) to get oil changes, at the same time. A gentleman, a year or so older than me, was at the Service Street location also. He wore his Ohio State Buckeyes sweatshirt (on a warm day). He and I talked awhile, after my wife left in the car. (Ladies first on oil changes.) The gentleman's last name is Yankee, but he is not a Yankee! He was born in Ohio. His wife and he had lived in Florida. They had “half-backed” to live in Tennessee. Mr. Yankee and I spoke on sports, “poly-tics,” and Christianity. He's a brother in Christ. I wished his wife and he well – and Ohio State well, unless against Georgia or Tennessee!

I understood why Ohio State was #2 in the AP, Coaches, and CFP polls. Why, in the CFP poll, did Tennessee rank #1 and Georgia rank #3?

In their first eight games, Tennessee had beaten five ranked teams (Pittsburgh, Florida, LSU, Alabama, and Kentucky) – while Georgia had beaten only one ranked team (Oregon). That's probably why the CFP poll ranked as it did, on 10/29/2022.

The rain that had poured, briefly, here, had started and continued to pour, in Athens, Georgia, after halftime. The rain had stopped near the end of the game.

Watching the game on TV, my glib Irish tongue rained out in eloquence – as I reacted and commented at frequent occasions! During the game, however, Mrs. Appalachian Irishman admitted, finally, that she wanted Tennessee to win. She likes Georgia, but she supports Tennessee. (She has a master's degree from the University of Tennessee - Knoxville.) She did not wear one of her orange Tennessee T-shirts, however.

I curbed my glib tongue, once my “long-suffering” wife admitted -- finally, after three years – that she likes Tennessee better than Georgia, in college football. After all, it's just a college football game.

To the “long-suffering” Mrs. Appalachian Irishman, I'm glad that you “came out,” yesterday, that you remain a Vols football fan. As you know, in 2019, I relegated the Vols to be my second favorite college football team, when I promoted the Dawgs to my favorite team. I am not a “fan” or “fanatic” (extremely enthusiastic) about any sports team. As I have written, in several articles that mention college football, I had decided that Saturdays are much more enjoyable, as a follower of Georgia football. I don't have enough decades left in life, to await the return of the Vols to their former greatness.

I wonder when Josh Heupel, who is doing well as the Vols' current head coach, will leave the Vols and return to his alma mater, to coach for the Oklahoma Sooners. This article is my prediction that he will – in a few years.

On Friday, 11/4/2022, I received a text from a former work colleague, which expressed the desire to see the Vols beat the Dawgs, the next day. I haven't replied yet. I thought about replying, after the game yesterday. I may reply tomorrow. Fridays were casual days at the office. Before I retired, I often wore my Georgia football T-shirt on Fridays. My colleague wore Tennessee football T-shirts. We enjoyed the humor in the rivalry. We are both Christians, so the ongoing rivalry is temporal.

After the game, I saw a post by a friend from my hometown. He used explicit and colorful metaphors to deride folks, who were born and raised in Tennessee, but who support a football team in another state – such as I do. This paragraph is my reply to him. What is my reply? “Yawn. Laughter. Your reasoning is subjective and inflamed by the Vols' loss to Georgia. You are welcome to keep your opinionated anger to yourself. I suggest that you stop drinking so much orange Kool-Aid. Your eyes look a little blurry! Do you have enough decades left in life, to await the Vols' return to greatness? Yes, they are doing well enough this year, but why are you angry and why am I happy? I don't throw a hissy fit when Georgia loses. Where are your priorities? I still love you, in Christ.”

Finally, a good friend emailed several of us today, on the Vols' loss yesterday. A sentence in his email included his humor on the loss: “The Vols were kidnapped, and a bunch of look-alikes took their place for the Georgia game.” My friend's email made several serious points. I liked his humorous point (cited) the best! He wasn't mad. He knows that I follow Georgia first then Tennessee – in college football.

By the Way - “Govrmint” Time Ended!

Getting of the mundane topic of college football, I had “so much fun” – setting back an hour 14 different time pieces – early this morning. Whew! At least we are off “govrmint” time finally!

Starting tomorrow, Mrs. Appalachian Irishman will be able to leave for work, with a little bit of early morning light forming – instead of driving to work in full darkness. For early risers, this is better – and safer.

The addendum to my 3/19/2022 article cited a valid source, to prove that – if “govrmint” time were year-round – then the sun would not rise until 8:47 AM, from January 1 through January 11 – of any given year. The addendum includes: “Do you want school-aged children arriving at school in the dark? Do you want to work almost an hour before the sun rises? I did not think so!”

I'm glad to be done with “govrmint” time once again – until next spring.

College football season is enjoyable. It's drawing near the end. Three games remain in the regular season. The “thousands” of bowl games will start. The College Football Playoff will determine the national championship team. As a Dawgs follower first, I enjoy Saturdays better that I would – if I were a Vols follower first. (The Vols are my second favorite team, y'all!)

I hope that my hometown friend knows the Good Lord personally. He may. His post of yesterday contained colorful adjectives that my glib Irish tongue prefers not to use (except in rare moments of anger or frustration). The Good Lord forgives my tongue, after I apologize to him. I also apologize to others who may hear me, but it's usually me talking with myself, when only God hears me.

Now that I have this sports article finished, my mind shifts to my third article, in the Christian Evidences series. I plan to write -- in answer to the question “Does God exist?” – that the teleological argument, alone, proves that He does.

My mind dwells on more profound thoughts – not on college football. I hope that yours does also.

Email ThisBlogThis!Share to TwitterShare to FacebookShare to Pinterest
Labels: Sports