Sunday, 10/18/20, was better hiking weather than 10/25/20, Sunday, when I wrote this article. 10/25/20 started out wet and cloudy, from the overnight rain. The sun didn’t appear until about 3:30 PM or so. Now, that’s not funny, Lord! The Good Lord has a sense of humor! Over the years, I’ve seen perfectly fine hiking weather during a workweek, with rain on the weekend. I’ve seen rainy and/or cloudy weather turn to sunshine too late for even a late afternoon hike. That’s not funny, Lord! Instead of hike, I wrote. 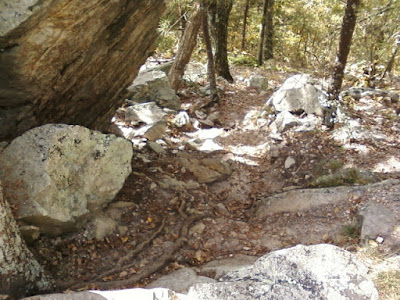 The weather was mostly sunny and too warm for this time of year, for my liking. I just hiked up the west trail and back down again. (When it’s cooler, I’m itching to hike the full ridge and out the east trail.) The above photo is looking down from where I’d climbed up. The rock bluff is to the left, in partial view. Climbing up is easy enough. 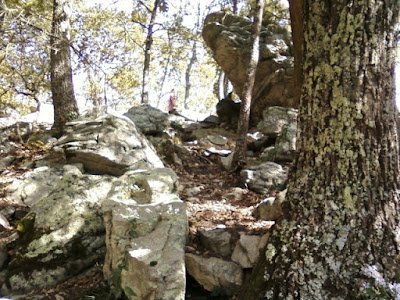 After some time at the west bluff, I took it easy back down the same direction that I’d climbed up. The above is the opposite view photo, looking back to the location of the first photo. They guy in the red shirt is standing about where I’d taken the first photo. My right foot and knee instruct me to be more careful going down. I’m still a “lame mountain goat,” but I can tell that I’m becoming less “lame,” slowly. This House Mountain hike #172 was my 36th House Mountain hike with “bionic” joints. In earlier “bionic” hiking, my right foot encouraged me to limp noticeably after a hike, into the next day at times, before it returned to: had been take a step; ouch; take a step -- then became take a step; that’s different; take a step -- to now it is take a step; that’s not much different; take a step.

Hey, Lord, could you speed up the “getting better slowly” part to “instant miracle?” No. You don’t work that way, except very rarely, anymore? Okay. I understand. I’m here a few seconds in life, compared to everlasting life, anyway. I’ll get along well enough, until You call me Home.

On my way down, near the end of the trail, I met an 80-year-old man, Mr. John S., who was hiking up. (I told him about meeting the 78-year-old man, on 10/4/20.) Mr. John S. lives alone now, not far from us. His wife passed away a few months ago. He is back to hiking again. (He had taken time off from hiking while his wife wasn’t well.) I had not met Mr. John S. on any previous hike, until this one. Mr. John S. is a fine man and brother in Christ. I hope that I see him again. Well, I will at Home, if not here.

After Mr. John S. and I parted, I met a group of younger folks. One young husband and wife were bringing along their four-month-old daughter. The mother was carrying their daughter in one of those satchels on her chest. I enjoyed talking with them and telling them about Mr. John S., who was ahead of them a little, going up.

Life is a cycle from birth to death. I saw a baby girl who was early in life. I met a fine man who was later in life. I’m closer in age to Mr. John S. than to the newborn girl. Accepting, at the proper age, the Good Lord’s free gift offer and living accordingly, the best you can, through life is life here and becomes everlasting life at Home.