May Day (May 1st, annually) is a festive occasion in Russia. The USSA (former USA) doesn't celebrate May Day. Mrs. Appalachian Irishman and I remember the celebrations from 1995 to 1999. (We moved there in October 1994.) The history of May Day is found on www.history.com. The specific link is here.

I have published this article on May 8th – Victory in Europe Day (USA/Great Britain). Russia (former USSR) celebrates VE Day on May 9th annually. www.history.com has the details here. The 50th anniversary of VE Day, in Russia, was 5/9/1995. We were in Moscow that day. I remember every detail. I still have the film photographs that I took that day. The following is a free photograph that I found on the “Interweb.” It's no one that I had taken. 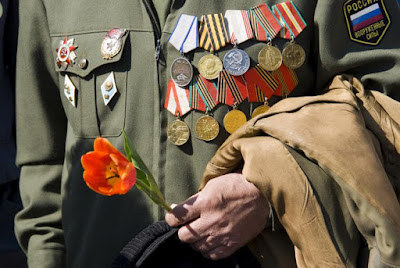 The USSA does not celebrate VE Day.

May Day, 5/1/2021, was last Saturday. I had felt fine, bionically such as I am, early. I suspect that the “spaghettios” that my wife fixed for supper, on 4/30/2021, or the literal dust that I cleaned at the office, on 4/30/2021, or a combination of both, made me feel плохо, after my shower. I managed to haul recycling and trash and to get gas. I had assumed it would be one of those survive-the-day type of days.

After I'd hauled trash, I went to the local Weigels, to feed my new, 'ol truck. I had just started to pump the 100% gasoline into my truck. At the same pump, on the opposite side, a young man pulled up, to get gas. As he started to get out of his car, he asked, “How are you?” I saw that he was wearing a blue police officer uniform. I said, “I'm livin' la vida 'Rona!” That started a very good and inspiring conversation that lasted much longer than it took us to fill our vehicles!

The fine young officer is an outstanding member of the thin blue line. 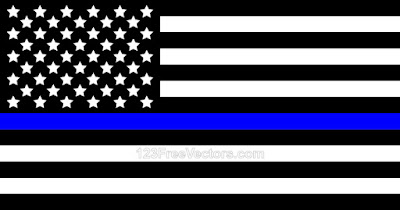 I have almost 40 more decades of life than him. My newly found friend spoke with wisdom and experience that are tributes to how well he was raised, educated, and trained. His words expressed his moral code and values. His words painted a canvas of his experience in law enforcement. He has an extremely tough and dangerous job. He told me several details. Despite his displeasure with the socialist propagandists, who disdain police officers and want to “de-fund the police,” he still does his job – every day. He is discouraged but not defeated. He still stands, wearing the blue uniform proudly.

I shook this young man's hand twice! I gave him my e-mail address. He knows this website. I have his e-mail address. I asked him if I may write this article, without mentioning his name, his work location, or any point of our conversation that might identify him. He gave me his full agreement. I told him that I would publish this article in a few days.

I regret that it has taken me seven days to publish. Well, not really. I have published this article on VE Day. The young officer spoke in a manner similar to World War II combat veterans, with whom I have spoken over the years – in the (former) USA and in the (former) USSR. My new friend has combat experience, as an outstanding member of the thin blue line.

Happy VE Day, y'all! I hope that you had remembered, before reading this article. Happy VE Day, tomorrow, to my Russian readers. (I know you have already remembered and will remember tomorrow.)

To my new friend, who holds the thin blue line, I will send you an e-mail shortly, to let you know that I have published this article. God speed to you. Thank you for your service!

I plan to publish another article this weekend. It has been a good and bad week.