This is the second of my two-part “Poly-Tics Smorgasbord Catch-Up” (to the blitzkrieg). The full moon was 4/26/2021, Monday. A full moon, according to the legend, can bring about abnormal events.

I used smorgasbord in my part-one article. I chose a carousel here. The carousel is spinning round and round way too fast. 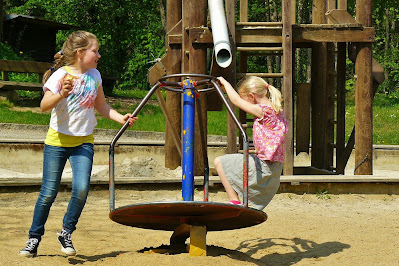 The above is another free stock photograph. I don't know the two girls. I hope they had fun. I am, however, dizzy. The following are some socialist democrat spins.

Aren't you tired of this spin? I had to do some research.

“Systemic Racism” was developed by sociologist, Dr. Joe Feagin. He is a professor at Texas A&M University https://liberalarts.tamu.edu/sociology/profile/joe-feagin/). “Systemic Racism” is a theory that speculates, based on various assumptions.

This once great nation made great strides against racism. Note, for example, the War Between the States, Dr. Martin Luther King and the Civil Rights Movement, school busing programs, preferential hiring, etc. Is this once great nation still “systemically racist,” after all its efforts to remove racism?

I submit that the socialists, having begun in the 1960's, are destroying families, communities, education, and religion. They have been doing so, by their programs that destroy what they claim they want to help. If the USSA is “systemically racist,” it is due to the socialist efforts from the 1960's to this date. I can prove my point, if anyone wishes to challenge me.

Yes, some people are racist. They are wrong. Racism is a two-way street. I have felt racism, from people, whose skin is a different color than mine. Stereotyping is wrong. We should judge a person by the content of character, not by the color of skin. Who said that?

Via https://www.merriam-webster.com/, I will define my terms. “Systemic” (adjective): “fundamental to a predominant social, economic, or political practice.” “Racism” (noun): “a belief that race is a fundamental determinant of human traits and capacities and that racial differences produce an inherent superiority of a particular race; the systemic oppression of a racial group to the social, economic, and political advantage of another; a political or social system founded on racism and designed to execute its principles.”

Anyone who says that any remark that I make, verbally or in writing, is “racist,” or that the USSA is “systemically racist” had better be ready to prove the point. An accusation proves nothing, without evidence. I wonder if the Socialists are using “racism” in a manner similar to how Hitler's Germany used “racism.”

Hitler's Germany went on a spending spree, in the early years, before World War II. The following is from https://www.whitehouse.gov/. I include www.congress.gov links. The first president of the USSA (or those who pull the strings of the puppet) have their monopoly money spending spree agenda.

The third leg is The American Families Plan: “introduced.” The website claims “introduced.” www.congress.gov does not show that it is introduced yet. The cost is approximately $1,800,000,000,000 ($1.8 trillion).

Note: the cost estimates are found in many places. https://dailycaller.com/2021/04/28/biden-american-families-plan-spending/ is a fine website where I found my information.

The USSA national debt is (as of approximately 5 PM today)

either https://www.worldometers.info/us-debt-clock/: $27.5 trillion (increasing every second),

or https://usdebtclock.org/current-rates.html: $49.8 trillion (increasing every second).

Whew! I, finally, have this two-part article, on Poly-Tics Smorgasbord Catch-Up, completed. I had more details in my working documents. I have deleted those from my computer. I am tired of it. Let's move on!

Come on, man! Can't we move on even faster, into socialist Utopian oblivion? Well, as despondent as this two-part article series has been, wait until I publish my next article! It will be based on a providential conversation, on 5/1/2021 (May Day) We don't yet celebrate May Day, in the USSA. My May Day 2021 article will be an inspiring tribute article. Wait for it!