At 2:27 PM, on Sunday, September 19, 2021, I have begun to fill this blank canvas. I saw clouds, as I looked out my home office window. We had a little rain later. We had a little rain Saturday. It was not good weather for my first House Mountain hike of my fall, winter, and spring hiking season. So, instead, here I had “sot,” as Dad would say, to fill this canvas with words. Buckle up! It's a five-page article. If you have short-term “Farcebook” attention span, then go away now. Otherwise, to those who still have normal attention span, I hope you enjoy this article.

I will meander a while. “Meander” is of Greek origin (Μαιανδρος). Maiandros (or Maeander) was a river-god of Karia (or Caria), in Anatolia (modern Turkey). The Menderes River (Büyük Menderes Nehri, in Turkish) is in southwestern Turkey. It leads to the Mediterranean Sea at Antalya. (You can do the same research as I did.)

Mrs. Appalachian Irishman and I enjoyed a two-week summer vacation at a nice resort near Antalya – in 1998. We were part of a three-family mission team to Moscow and Klin, Russia (10/1/1994 to 9/30/1999). The Covington family had already moved back to the USA. The Bryant family and we were still in Russia. We, the two families, had needed that vacation! Summer is dacha season in Russia. Our mission work always slowed down some in the summer, as folks were often gone to their dachas. Moscow slowed down. We slowed down. We had a great, relaxing, and refreshing vacation that we had needed. I have the film photographs and memories. I may get around to writing more, with photographs, if I decide to take the time to do so. 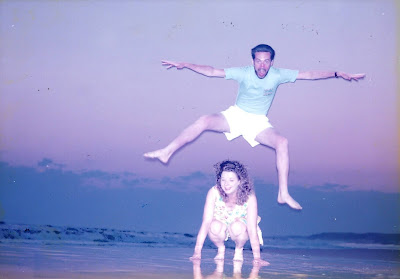 Well, the above is one photograph. It has been in a frame, about twenty or more years. It has been on our living room end table about twenty years. I was age 38. Mrs. Appalachian was age (subtract three years from my age then). At sunset, the photographer asked me to jump over her. I did. I still wish that I had jumped straighter. I did as well as I could do, given the lighting and waves from the Mediterranean Sea. (Some folks call it an ocean. I call it a sea.) I think my “bionic” body could still jump over her as high. Aside from the 25 surgically implanted metal items in my left shoulder, right knee, and right foot, I'm still in the same shape – aside from the gray hair and a few more wrinkles. Mrs. Appalachian Irishman look EXACTLY the same NOW. (She forced me to write that!)

On 9/17/1787, the Constitution (which is ignored mostly nowadays) of the once great USA was signed by the delegates of the Constitutional Convention. Y'all are welcome to research and read all the details. 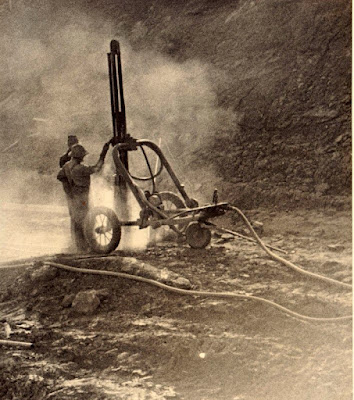 You are welcome to search my website, by “Dad,” family, or heritage topics. I have written several articles about Dad. The above photograph is from 1947. Dad was age 20. He is the man standing, wearing the white safety hat. Papaw Marion Ferrell (Dad's Dad) was age 67. He is the taller man, standing behind Dad. They are working the cable drill, to drill a well for someone. That was years before Dad got his well machine. (I know the details.)

On 9/17/2021, while I “hitting a lick” at work, at the “Hadean Realm,” I remembered. My youngest brother did also. I wonder if my other two brothers remembered.

My youngest brother called me, early afternoon, yesterday. He stated that, on 9/17/2021 (Friday), the pump at the house of his in-laws (both have passed on, but the house is still standing and maintained) had stopped working. Dad had drilled a well for my youngest brother's future in-laws, decades ago (probably in the 1960s). In 1981, as my brother recalled, Dad (at age 54) had replaced the pump. My brother married the youngest daughter of his now deceased in-laws, on 5/6/2000. I had the honor to perform their wedding ceremony. Mom (age 67) attended, in her wheelchair. Dad (age 72) was still alive and able-bodied well enough, despite his ticker trouble.

I had planned to write a detailed article on “poly-tics” that I had planned to title “Poly-Tics Smorgasbord.” Well, I don't care for the writing of it now. That temporal “poly-tics” stuff doesn't matter much, as I sit here writing, at this moment in time.

I have a few notes in my working document, which I will delete. You can click the links if you wish to do so. I had planned to write more about:

The Russian “election,” which is similar to the USSA 2020 Presidential election. Feel free to check out: 9/18/2021, Vladimir Putin's Opponents Are Bowed but Not Broken as Russia Votes (newsweek.com) and 9/19/2021, Russia Election: Opposition Complaints on Final Day of Voting - BBC News. The USSA is catching up to the former USSR quickly!

The new cold virus is still making it's won't-go-away rounds. Aren't y'all tired of the corony crap? I am. I heard that the Knoxville Zoo tigers had their corony shots a few days ago! That made the news? Tigers got corony shots? Really? Wake up, America! I wasted too much of my writing time and ability last year and maybe early this year, on Corona Myopia Psychosis topics. (You may search my website.) I'm tire of the corony socialist agenda! Hey, USSA first President Biden, come here to force me to take a corony shot! I'll teach you what a real man is like! Got it? Good! The Knox County Mayor, apparently, wrote a letter to President Biden, along the same line. I doubt that Glen Jacobs' words were as poignant as mine are here and NOW.

9/18/2021 revolt that was not. Apparently, yesterday, some type of gathering at the White (or of no color) House happened. The socialist media feared a biblically and Constitutionally conservative revolt that would include some type of nuclear bomb riot. Something fizzled yesterday. I read and heard a few details. I don't care. The USSA started on 1/6/2021. The first USSA president was inaugurated on 1/20/2021. The down hill slide on the ice to USSA oblivion is progressing nicely, for the socialists - if we biblically-based and Constitutional conservatives would just either die off or get out of their way.

Well, about 6 PM, I think I will go outside, to see if the rain has stopped or not. Did I meander enough? At least I have this article published.

Y'all keep meandering in the right direction, to go Home, eventually! Send me one of them “thar” e-mails, if you would like to “talk” more, via e-mail.

I have a known friend, whose birthday was yesterday. She referenced Ps. 139. Ps. 139:23-24 reads, in English, “Search me, God, and know my heart; test me and know my anxious thoughts. See if there is any offensive way in me, and lead me in the way everlasting."

Yesterday, I wrote to my friend: “I wish that all folks wanted the Lord to lead them into everlasting.”

It's about time for supper, so I'll publish this article, finally. I wish that all folks wanted the Lord to lead them into everlasting. It would be a much better world. The temporal is endured. Everlasting will be bliss.

Email ThisBlogThis!Share to TwitterShare to FacebookShare to Pinterest
Labels: Family, Heritage, Life (such as it is)