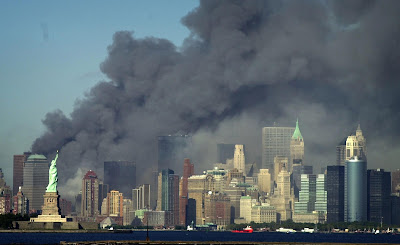 The above photograph is from APNews.com. You can find many photographs on the “Interweb.” The above is one. The Statue of Liberty was and is still standing.

Dad was still in this temporal world. Mom had gone to her everlasting Home, on 12/27/2000. (Dad joined Mom, on 1/25/2008.) Mrs. Appalachian Irishman and I were still living in our apartment on the ridge above where the Knox Center Mall used to be. Mrs. Appalachian Irishman was, and still is, teaching for a living, in Sevierville, Tennessee. I was working as a second shift operator and help desk agent at DeRoyal Industries, in Powell, Tennessee. Almost two years had passed -- since we had returned from our five years in Russia.

On 9/11/2001, Mrs. Appalachian Irishman had already gone to work. I was alone. Just after 9:03 AM but before 9:37 AM, Dad called our landline. I was awake but still in bed. He told me about the planes that had hit the two towers. We talked a while. I remember. Dad, at the time, was doing well enough. I worked my second shift job. Life was surreal. Folks were going through a Tuesday work-a-day – with blank expressions and little comments. The timeline of 9/11/2001 is found on several websites. Here is one website.

In 2003, I worked on my time many mornings to early afternoons -- before working to make money on my second shift job – at our under construction house. We had broken ground in early December 2002 – before Dad had his ticker (heart) trouble later that month. We moved into our new house, on 6/7/2003 – the day, in 2000, that Health South let Mom fall. I know the details. I had done most of the interior sanding, puttying, and painting. Mrs. Appalachian Irishman and family had helped some.

I still have the portable radio, to which I listened, while sanding, puttying, and painting. My youngest brother had given it to me as a Christmas gift. The radio played The Charlie Daniels Band's song “In America” (1980) often. Take a moment to listen to the song. I did. Charlie Daniels went Home, on 7/6/2020. The song “In America” remains. I wish that this “new America” had the same unified conviction as that America did back in 1980 (Iranian hostage situation, 11/4/1979 to 1/21/1981) and in 2001 (9/11/2001). That America had taken a couple of hard licks. That America was still standing.

Well, 9/11/2001 was 20 years ago. I still do not understand why the USA (USSA as of 1/6/2021) could not win the “war on terror” in a year or two. The USA had joined the Allies (British Empire, USSR, etc.) to beat the Axis (German Nazis, Italian Socialists, and Imperial Japanese) in less than four years. World War II was the last total war that the USA fought. After WWII, the USA started fighting “politically correct” wars. The USA tied in Korea, lost in Vietnam, won the Gulf War, and has lost the “war on terror.”

The USA (USSA) lost the 20-year “war on terror.” An almost countless number of soldiers died or were injured permanently. All soldiers who served in that tragic “war on terror” are HONORED. This article HONORS all who served! The defeat was NOT the fault of our soldiers. The fault rests on the shoulders of the many politicians (Republicans and Democrats alike) who used poor judgment, by which the war was lost.

Twenty years have passed. I have seen the memorial to Army Staff Sgt. Ryan Knauss. It is at the Corryton Weigels (where my '06 Frontier gets 100% gas), 2.5 miles from our house. 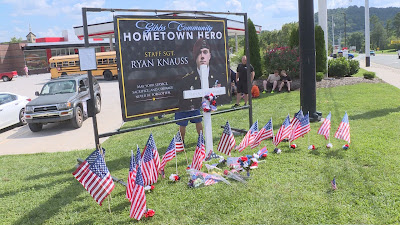 Corryton is a small community in east Knox County, Tennessee. I don't know anyone by the last name of Knauss. I may have walked near and spoken briefly with someone named Knauss, while on mundane errands, but we didn't exchange names.

In May 2016, Ryan Knauss graduated from Gibbs High School, three miles from our house. He enlisted in the Army after graduation. He married. At age 23, Ryan Knauss was one of the 13 soldiers who died, on 8/26/2021, in the terrorist bomb attack, at the Kabul airport, in Afghanistan. (Granny and Papaw Wood married on 8/26/1931.) His obituary is on the Knox News and the Mynatt Funeral Home, Inc. websites.

Yesterday, Saturday, September 11, 2021, there was a memorial service for Staff Sgt. Ryan Knauss, at 5 PM, at the Gibbs High School Football Stadium. WATE (by: Kristen Gallant; posted 9/11/21, 11:19 PM; updated 9/12/21, 12:04 AM) has a video and written record. We decided not to join the large number of people who attended. Instead, I plan to print this article on paper and place the printed copy in the memorial box, which is behind the memorial wall, at the Weigels. I hope that the memorial to Army Staff Sgt. Ryan Knauss remains permanently at the Weigels.

Yesterday, Saturday, 9/11/2021, my youngest brother called at 8:11 AM. We talked 44 minutes. His wife had managed to sprain her right foot severely. Later, my '06 Frontier and I hauled trash. I got a haircut. My truck had a good hand washing and oil change. My truck and I went to the Tractor Supply. We came home -- just after Mrs. Appalachian Irishman had come back from Dollar General Store and IGA shopping and before she went to visit her folks, 3.5 miles away. It was a usual Saturday.

While my truck was getting his oil change yesterday, I conversed with a man, who is a little older than me. He is a veteran. He had tours of duty in Korea and elsewhere. He taught me a lesson. We stood. We looked eye to eye. We talked. We shook hands. I thanked him for his service.

I have weapons. I have ammunition. I know how to stop a life threat, if I need to do so. I am ready. I may have too much ammunition. The man, at the oil change location, educated me. He said that I do not need more than one clip (about 15 rounds). He said that I could stop 15 attackers. An attacker that I hadn't stopped would get me. Then, the remaining attackers would take my weapons and the rest of my ammunition. I hadn't thought about it that deeply – until yesterday. I will still keep the ammunition that I have.

Tony is my friend, brother in Christ, and barber. Yesterday, while he was giving me another great haircut, he and I conversed on several topics. We ended on a spiritual note. Tony and I are ready for the Good Lord to return. I spoke the following to the Good Lord, in Tony's presence, yesterday, “Dear Lord, please call everyone 'out of the pool' NOW!” He didn't. I was disappointed. I thanked the Good Lord for listening to my request again. I've made that request many times.

My perpetually written now prayer, to the Good Lord, is: “Dear Lord, please call everyone 'out of the pool' NOW! Come, dear Lord, soon!” He will eventually. His coming may not be in my lifetime. I hope it will be!

I place the temporal of 9/11/2001, 8/26/2021, and 9/11/2021 into my everlasting perspective. This is how I endure the realities of this temporal life. Of course, temporal life is not all bad or evil. This world has the good, bad, and ugly. I like the good. I endure, by evident faith, the bad and ugly. I hope, in known and verified faith assurance. In the everlasting, I will think back on this article. I will smile.

I will keep turnin' right and goin' straight. I have accepted, and try to live in appreciation of, the Good Lord's free-gift offer of everlasting salvation. I'll get HOME – eventually. I hope that you understand. If not, you are welcome to e-mail me. God knows how to help you. I am one poor beggar who found the Bread of Life. I know how to help you – if you will contact me and hear.