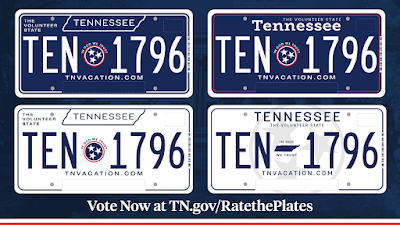 Apparently, the once great State of Tennessee wants anyone (legal or illegal), with an e-mail address (valid or invalid) to VOTE! Anyone (in Tennessee or any nation) can vote to pick one of four options for the new vehicle plates!

“Rate the Plates: Gov. Lee Invites Tennesseans to Pick New License Plate Design: Voting open now through September 27,” 9/20/2021, 12:53 PM –  is the website! Don't be afraid! Vote early and often! I picked option #4. I voted about three times – using false e-mail addresses. Either of the two plate-of-no-color (white) options is fine. I do not want one of the two “blue plate specials.” I have a silver truck. My wife has a red car. The “blue plate specials” would not match the colors well.

Mrs. Appalachian Irishman speculated that I would write this article. I had replied that I would not. I had said, “It's chump change and not relevant.” Well, I changed my mind, as she is fixing supper!

Sarcastic humor is the best medicine – to endure this temporal world. I know. Y'all keep turnin' right and goin' straight out there! I figure that the Good Lord enjoyed a laugh, while being aware that I was writing this article. He is omniscient, of course. Do you want me to prove it? I can! He is also omnipresent and omnipotent. The Lord can't force bad people of free will to do good. God's omnipotence – by having creating people in his image, who have free will – cannot force us to do good. Omnipotence can't do the logically impossible. (This is getting into a “problem of evil” topic, into which I have delved before.) Sadly, far too many people are turning left and heading down. I wish that were not, but they are.