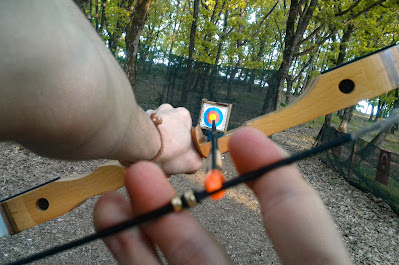 Photo by Koray Guler on Unsplash.

I started to write this article on Saturday, but chores and college football overruled. Today, the weather is cloudy and cooler, and we have about an inch of snow on the ground – believe it or not?

On 10/14/2022, Friday, some of the Fearghail clan gathered, at the home of my youngest brother and his family. The gathering included a new teenager and crossbow shooting! The day was wonderful! The weather was sunny and not too warm.

I'll mention Rogersville Heritage Days, before I conclude. I must “apologize” to the out-of-town vendors.

I didn't take any photographs. My semi-intelligent phone was in our 2012 Nissan Sentra. Mrs. Appalachian Irishman had her phone, but she's not the photographer that I am. My youngest brother did record our singing of “Happy Birthday,” which I sang in Russian.

On that Friday, the youngest daughter, of my youngest brother and his wife, attained her first year as a teenager! We drove up to join the celebration!

The need to “visit the restroom” was mentioned. My humor had asked, “So, you need to go to the crapper?” Thomas Crapper improved the design of the commode. I'm glad that my last name isn't another name for the lavatory – as Crapper's is! By the way, the Good Lord won't spank you for saying “crap,” but your mother might!

After birthday dinner and ice cream cake, we all went out to the back yard. Their two dogs were glad to see us! I enjoyed playing with them. Later, once we returned home, Molly, our doggy, had to sniff on us a while!

The highlight was target shooting, with a compound bow and arrows! I hadn't shot a regular bow and arrow since high school. The Boy Scouts taught me how to shoot a bow and arrow. A high school buddy and I made bows ourselves. We'd cut and shaped either hickory or elm and attached line. We had to buy arrows, since the ones that we'd made were not perfectly straight.

I watched as my youngest brother and two daughters shot his compound bow. I decided to try. I'd never shot a compound bow before. I took some time, to figure out the process. I took one shot. I hit the target, about 30 yards away, a little low and to the left of dead center! I tried to set up for another shot, but the compound bow didn't want to cooperate with me. I need to practice the use of a compound bow. I may do that. We couldn't find one arrow that had been a stray shot. I guess that someone found it, after we left.

That Fearghail heritage day made a good memory – as a straight arrow shot to the target center!

On Friday, my youngest brother and family did not want to go walking around Main Street on Heritage Days. That was fine with us. We had a Fearghail heritage day instead.

I honor the good heritage of my hometown. My 8/7/2021 article – which has viewers almost every day – confirmed that Rogersville is the second oldest town in Tennessee, not Dandridge! (Our Dandridge friends never did rebut my proof!)

I'd like to have seen at least a couple of cousins and some high school friends – if we'd had enough time. We enjoy, well enough, the walk up and down Main Street, glancing into some of the vendors' shops. We might have bought some Winesap apples, if any were for sale. We're not interested in the usual items that vendors sell.

Many, or most, of the street vendors are not local. They come in from out of town. So, I must apologize to those out-of-town vendors. No sale this year! Not even a stop by to glance!

An arrow must be straight, to be a straight shot. A crooked arrow will not shoot straight, even if aimed by the best marksman.

The Fearghail clan gathering affirmed that the daughters of my youngest brother and his wife are growing up straight as an arrow. They will “shoot straight” in life, since they are being raised right.

Are you a straight or crooked arrow? Shoot straight in life. The marksman's target is the heavenly center!