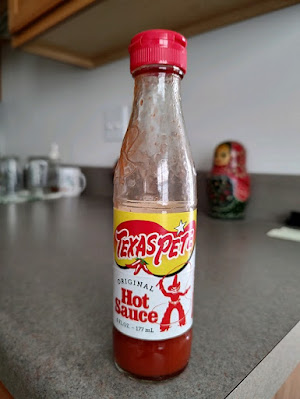 I often listen to Phil Williams, on The Phil Show, NewsTalk 98.7 FM, while taking my morning constitutional. He shares humorous news stories that I wouldn't hear otherwise. Phil Williams inspired my 9/24/2022 article, on Blue Horse notebook paper. He did it again today – while I was sitting on the throne! (A man has to keep his exhaust system clean.)

Phil Williams informed his audience about a man, who has sued Texas Pete, since the product (the hot sauce that we have in the refrigerator) is made in North Carolina – not Texas. I had to fact-check Phil Williams! “This can't be true,” I thought.

After my morning constitutional, I shared the news with Mrs. Appalachian Irishman, who is on fall break this week and not working. Then, I opened our refrigerator, took out the half full (or empty, if you're a pessimist), six-ounce bottle of Texas Pete Original Hot Sauce. (Sometimes, I add it to scrambled eggs, for weekend breakfasts.) We've been buying Texas Pete for years. I never knew where it was made. I didn't care. I just like it.

“Surprise, surprise,” as Gomer Pyle would say! Texas Pete is made in Winston-Salem, North Carolina, by the T.W. Garner Food Company. The label also states: “Garner Foods, est. 1929” and the texaspete.com website. By the way, the Texas Pete label states “glutton free” – as if I care.

I took the above photograph this morning. The Texas Pete bottle was on the corner of the kitchen countertop. Yes, to my Russian readers, we keep a Матрешка on the countertop. It reminds us of Russia (10/1/1994 - 9/30/1999).

I decided to search the “Interweb” for “Texas Pete class action lawsuit.” What do you know? Phil Williams hadn't invented the story! It's true, folks! I can't make up this stuff! It really happened!

The Charlotte Observer reported this morning: “Texas Pete hot sauce is ‘deceptive’ because it’s made in North Carolina, lawsuit says,” by Julia Marnin, updated 10/11/2022, 9:44 AM. The first sentence of the article is:

A man bought a bottle of Texas Pete original hot sauce for $3 before discovering it is from North Carolina and not Texas.

The article continues, by stating the man's name. He's from Los Angeles, California (of course). He'd bought a bottle of Texas Pete in 2021. On 9/12/2022, the man sued T.W. Garner Food Company, for false advertising and violation of consumer protection laws. (Why did it take that man about a year to sue?)

The article contains the link to the Texas Pete website, which explains how Texas Pete sauce got its name, in 1929. The factory is in Winston-Salem, North Carolina. The corporation is T.W. Garner Food Company, incorporated in 1946. They have 17 products.

My Phil Williams fact-check verifies his statement. It's “just the facts, ma'am” – “believe it or not.”

My Suggestion, in Humor, to Texas Pete

The folks at T.W. Garner Food Company might want to add the following warnings, to their Texas Pete labels (if there's enough room):

– Caution. Sauce is hot. It could burn your mouth.

– Texas Pete sauce is not made in Texas. The cowboy on the label is not intended to deceive.

– The plastic cap and glass bottle are recyclable. Please recycle.

– Texas Pete is striving to be “carbon neutral.” Please give us time, and don't sue us yet.

By the way, why did the California man, in 2021, pay $3 for a bottle of Texas Pete? The Texas Pete website shows that a three-pack of their six-ounce Original Hot Sauce costs $5.50 (divided by three is $1.83 per bottle). Our local grocery store (website known) sells the same six-ounce bottle for $1.38. Of course, a six-ounce bottle of the sauce probably cost $0.75 or so, before stagflation.

Have you heard the joke, about “everything's big in Texas?” I heard a version of it as a teenager. I've improvised it several times over the decades. Here is my version today:

A man drives to Texas. The highway becomes much wider, as he enters Texas. He stops to buy a drink. He gets out of his truck and uses a ladder to climb up onto the curb – because everything's big in Texas.

He orders a Coke. He hears “beep, beep,” as a forklift brings his huge Coke to him – because everything's big in Texas. He drinks as much of the Coke as he can.

The man needs to take a leak. He asks, “Where's the nearest bathroom?” He's told to go out the door, turn left, walk two blocks, turn right, and walk two more blocks. Walk to the edge of the pier. The bathroom will be in front of him.

The man starts walking, as instructed. He's trying to hold his bladder. He reaches the edge of the pier. Slipping, he falls into the Gulf of Mexico. He cries out, “Lord, don't flush it!”

I hear some of you laughing! Is a dime-a-dozen, ambulance-chasing lawyer trying make some money off the California man's lawsuit against Texas Pete? I wonder. You know, of course, that 90% of the lawyers give the other 10% a bad name!

Well, I'm off here for now. At least my “bionic whatevers” of last week (my 10/7/2022 article) are back to “bionic normal” today. Heck, my left shoulder and side may have improved -- again – by another setback to go forward.

Thanks for the laugh, this morning, Phil Williams!