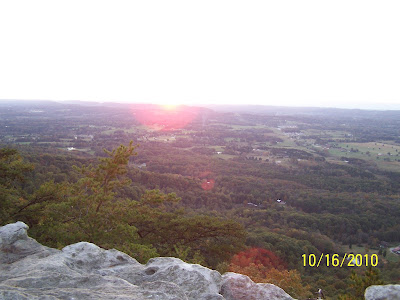 I had taken the above photograph on House Mountain, on Saturday, 10/16/2010 – my 71st hike there. I was at the lower middle bluff, looking west, of course. My 10/24/2010 article includes all seven photographs that I had taken. The orange glow, at sunset, was breathtaking. I hiked out in half-moon darkness.

Rocky Top still has an orange glow of victory, after the game last Saturday. My 9/18/2022 article reviewed the 9/17/2022 football games that Georgia and Tennessee played. On Saturday, 10/15/2022, my Georgia Bulldogs (Dawgs) and the Tennessee Volunteers (Vols) each played different teams, at 3:30 PM. I flipped back and forth between the TV stations – staying on the Georgia game mostly. It was a pleasant football Saturday.

The Georgia - Vanderbilt game ended earlier. Tennessee snatched victory from the jaws of defeat against Alabama! Mrs. Appalachian Irishman and I watched the entire final half of the fourth quarter. As a Bulldog follower, the final minutes of the Tennessee - Alabama game were certainly entertaining and somewhat humorous! I did not endure the tension, frustration, then elation – as Tennessee fans did. Mrs. Appalachian Irishman, however, did get tense, frustrated, then happy. Molly (our doggy) and I enjoyed witnessing her emotions! My wife still sips a little orange Kool-Aid.

The Vols, who scored their most points ever in the 105-game series, improved to 6-0 overall and 3-0 in the SEC, securing their first triumph over the Crimson Tide since 2006. In surrendering the most points since giving up 54 to Sewanee in 1907, UA fell to 6-1 overall and 3-1 in league play.

Also of note, Tennessee has defeated four ranked teams for the first time in a regular season since 1998. That year, it took care of No. 17 Syracuse, No. 2 Florida, No. 7 Georgia and No. 10 Arkansas.

Any Vol fans willing to bet?

Email ThisBlogThis!Share to TwitterShare to FacebookShare to Pinterest
Labels: Sports