Looking out my home office window, at 2 PM on the dot, as I start writing, I see that the weather is still partly sunny. The rain yesterday is still mud, in the known areas, on “my mountain.”

I started at 1:40 PM, going up the west trail, as I do usually. (I touch a post, just west of the parking area, to mark my start time. My ol' truck and I were lucky. We had found a good parking spot, in the upper parking lot.) The weather was warm, but not too warm, and mostly sunny, with some wind from the southwest. (The wind was bringing in the rain that came the next day.)

I me a couple, not far into my hike, at a spot I know well. They were resting at a rocky area (one of many), on their way down. They appeared to be in their 50's. The man had two fully “bionic” legs, from the knees down. He and I exchanged a few pleasant words. The doctor didn't cut off my right foot. (I've wished that he had done so, several times. I think that it would have been better, if I had a complete foot replacement.) That good man and I inspired each other! He inspired me more than I inspired him. I remember many details of that relatively brief conversation.

I touched my rock at the west bluff and marked my time -- 34 minutes from base to bluff. (Will my right foot ever allow me to return to the usual 24 to 28 minutes? I wonder.) 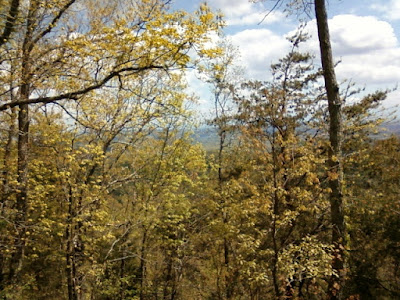 The photograph, above, is the only one that I took. It looks southeast, from the west bluff. The trees are budding out nicely. The leaves are back and coming back more. Wild flowers are in the area. It is a sign of spring.

A couple of young men were on the bluff. One stated that he was born in 2006. I told him that was the year that I started this website. (It's the year my new, ol' truck was built also.) My first article was on Monday, March 06, 2006 – “How to Pronounce 'Appalachian.'" Those two fine young men gave me hope for the future. They have the proper, timeless, values.

Early in my hike up, I had passed a woman, who had indicated that she was taking her time. She's in her 30's. She arrived at the bluff, as I had started to hike back down (the same west trail). We talked a bit. She doesn't allow her health trouble to prevent her from hiking a ridge! She was glad to know of other hiking areas around here. She plans to hike them. I encapsulated my “bionic” story to her. We inspired each other. I may have inspired her a bit more than she did me. (I have never had asthma trouble.)

Going down the same trail, two men were behind me, at a point. I had caught up to them, while they were resting. I led the rest of the way down. Near one, of the six, main switchbacks, two small rocks decided to allow my left shoe to roll over them. (I had missed noticing them, while conversing with the men behind me. That was my fault.) I decided to land on my left hip and left forearm. That was the second time that I've taken a fall hiking “my mountain.” (The first time was “pre-bionic,” when my left foot stepped on a snow-covered rock, at an east trail switchback, while I was going down. I didn't know ice was under the snow!) That second-ever fall led to “bionic” conversation.

One of the men, in his 30's, had temporary “bionics” in, as I recall, his left foot. Years ago, he took foot damage. He had “bionics” installed. He had them removed, after he had no longer needed them. (My “bionics” go with me to the grave. My everlasting body will not have them.) We talked “bionics” as we continued hiking down. I understand the bouts of depression that he had. He opened up. I opened up. At the parking area, I showed him my snow photograph, with my name on it. It's on the information board, along with other photographs. He knows this website. We parted, by looking each other in the eye and shaking hands. I hope that I see this young man again.

At 3:40 PM, I touched the same post that I had, at 1:40 PM. I did not hike the full two hours. I enjoyed the view on the west bluff a while. I had conversed with the fine folks, whom I have mentioned. Two hours in the woods improved my – right foot and knee, disposition, and spirit. A day in the woods adds a day to longevity. I do not hike, to converse with folks. I hike to hike! House Mountain has been very well known for many years. It was not as well known, when I had started hiking “my mountain.” Meeting and conversing with folks is a side benefit that I enjoy.

With apology to my new ol' truck, I didn't take a photograph of him. A man was waiting on me to leave, so he could take the same parking spot. Someone had parked, incorrectly, close enough behind me. I know how to back, turn, back, turn – repeat. My truck and I did that enough to be free. I had thought about writing a pithy note and placing in under a windshield wiper blade on the car that was parked incorrectly. I refrained. At least, my rear bumper didn't leave a crease in the driver's side door!

At 5:30 PM, I saw readership: all time 93,859; today (so far) 422; yesterday 455; this month 8,734 (so far); and last month 4,757. I can't see reader identities. I can't know who subscribes to receive e-mail notification, when I publish an article. Thanks, y'all, for stopping by, with a cup of coffee, and reading a while. I hope my words are beneficial. They are for me, as I write them. (I haven't been writing since 2 PM. I took breaks and did other stuff, which includes having called two of my three younger brothers.)