I did not intend to write this article today, on Good Friday. Postal mail yesterday and e-mail today, however, set my thoughts into motion. My fingers decided to start typing.

The USSA slide into “democrat socialistic utopia” is becoming a free fall, rather quickly. The following are three examples.

We are on the newsletter e-mail list of USA (USSA) Senator Marsha Blackburn (Republican, Tennessee). We received a newsletter this morning. On 3/30/2021, she sent a letter to the Secretary of USSA Department of Homeland Security and the Acting Director of USSA Immigration and Customs Enforcement (ICE). Apparently, ICE has promised $86,900,000 Monopoly money to, Endeavors, a Texas-based nonprofit. The purpose is to “house about 1,200 illegal immigrant family members in hotel rooms.”

The “democrat socialist” goal in NOT to secure the border. It is to allow illegal aliens to flood into the USSA. The goal is to water down the conservative population percentage of the total USSA population. They are winning.

Senator Blackburn, on 4/1/2021 (Atheists' Day), had questioned the first president of the USSA (Biden), on the $2,000,000,000,000 “infrastructure plan.” Her main critique was that six percent or less of the Monopoly money would be used for roads and bridges. She had other valid points of criticism also.

Earlier today, Good Friday, Senator Blackburn, with two others, introduced the Paving the Way for Rural Communities Act of 2021, as “a tax-free alternative.” The details do not indicate the allocation or re-allocation of Monopoly money, as far as I took the time to search. The proposal indicates the removal of various government red tape items.

Senator Blackburn and others are trying to stop the printing press from making more Monopoly money. I hope they succeed.

Apparently, if the USSA president states that two trillion dollars ($2,000,000,000,000) – which the USSA does NOT have – will be spent, then I assume that he knows how to grow a “great new deal” of dollars on a money tree. Otherwise, the printing press will continue to print more and more Monopoly money. Eventually, the dollar will be as worthless as . . . . 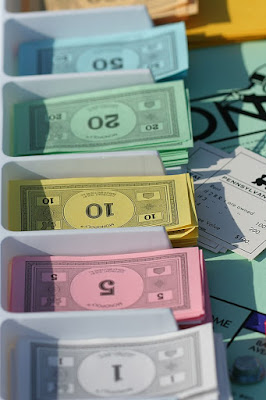 As a point of further interest (pun intended), Mrs. Appalachian Irishman and I received our American Rescue Plan Act of 2021 payment card today, Good Friday. We do not need the Monopoly money, which had to have been borrowed from China, etc. I hope, when we deposit the payment card in our bank account, that we help rescue America. The country needs to be rescued.

Money does not grow on trees. It is, however, printed away into devaluation. https://www.worldometers.info/us-debt-clock/ and https://usdebtclock.org/ both still click away! I like the second website. It looks better. The number are close enough to matching.

I have been wondering why the Stock Market has not been tanking into a bear market. I had speculated that the socialists are beginning to take over the Stock Market. It turns out that I was correct.

By postal mail, on Atheists' Day, yesterday, we received requests to vote by proxy, regarding an item in our IRA portfolios. (We get them about once a year.) I shred and recycle them without reading, usually. I took the time to read this one. I'm glad that I did.

From Reuters, 3/15/2021 article, it seems that Warren Buffett -- age 90, controlling shareholder, Chairman, and CEO, of Berkshire Hathaway Inc. -- urged shareholders to reject the proposals, made by certain shareholders, that would require annual reports, regarding the efforts of the corporation to address “global climate change” and to promote “diversity and inclusion.” (It's not global warming anymore.) Those two items have been part of the socialist agenda a long time.

I decided to dig a little deeper. I found several items that support my speculation. One, among several, is Task Force on Climate-related Financial Disclosures. From their website, “As the Earth’s temperature rises, increasingly common natural disasters are disrupting ecosystems and human health, causing unanticipated business losses, and threatening assets and infrastructure. In response, governments and private sector entities are considering a range of options for reducing global emissions, which could result in disruptive changes across economic sectors and regions in the near term.”

The more one digs, the more he finds. I dug more. I found more. You can do the same. The following are a few organizations that support the ones that advocate “global climate change” and “diversity and inclusion” factors in the Stock Market: Climate Works Foundation (which is supported by it's financial contributors), Children's Investment Fund Foundation, Sea Change Foundation, etc.

The Socialists are becoming an ever increasing force in the Stock Market. In the long-term, that is bad for the USSA. In the short-term, our IRAs are still holding their own. We may be able to retire eventually – depending on how fast inflation starts eating into our nest eggs.

This is still a Good Friday, folks – despite this article and the red bud and/or dogwood winter we are in now.

My next article will place this temporal triviality into everlasting perspective.