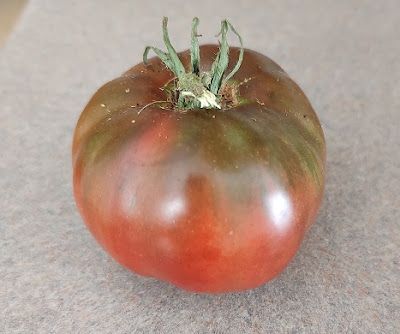 Hey, folks! This is Mrs. Appalachian Irishman (aka 'Mater Lady) -- publishing my first article here! On 8/28/2022 -- as I was taking the above photograph, of the prettiest Cherokee Purple tomato that I have grown this summer -- Mr. Appalachian Irishman commented that he would invite me to be a guest writer on his website. He said that I should write about the tomatoes. He was really goading me and making fun of my photograph taking of a tomato. Well here we go!

Let’s start at the beginning. In late April, I found out that a local school was having a plant sale. I went online to a website that a coworker provided me and discovered that they had several varieties of tomatoes for sale, at 50 cents per plant. They also had flowers for sale.

I bought about four dollars worth of plants -- six tomato plants and two kinds of flowers. I had the coworker, who had given me the information, pick up the plants and bring them to me at school, my workplace.

Mr. Appalachian Irishman has been a little leery of eating the Cherokee Purple tomatoes, because the first ones picked were cracked. He thought that they were diseased, moldy, and “full of rot.” He carried on so about this! I must admit they did not look good, but they were tasty. The latest harvest has looked much better.

By the way, my youngest sister suggested having a good ol' 'mater sandwich. Good idea!

By the way, I took the photograph, below, earlier today. I had to add a bit of extra humor, with a serious ending. 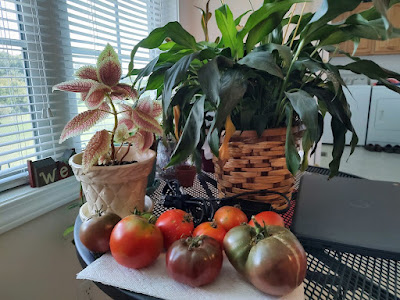 I was in the kitchen. In 2002, I designed the kitchen nook, so we could place a small table and chairs there. I can't eat at the kitchen table. Why, you ask?

Do you see nine tomatoes, six flowers in pots, and one laptop? (All the potted plants aren't visible.) There is no room for this Appalachian Irishman to set a plate or cup of coffee!

As a serious close, the large, green plant is the gift from my youngest brother and his wife. The gift was for my mother-in-law's funeral. She passed on to everlasting joy, on 4/30/2017. That plant has thrived for over five years so far. My mother-in-law thrives everlastingly.

This was such an enjoyable read! Mrs Appalachian Irishman, you may have inspired me to write a few things too one day. Great entry!