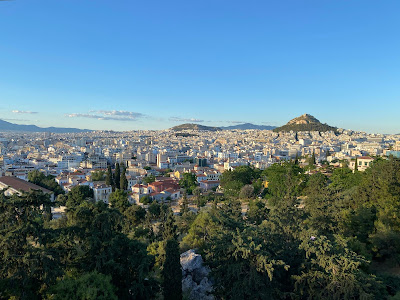 “A wonderful view of the Areopagus Hills in Athens, Greece,” 8/3/2022 free photo by Datingscout on Unsplash

Greetings to my readers – especially to my readers in Slavic countries. I have called the Russian invasion of the Ukraine the “2022 Slavic War.” A war starts when a nation invades another nation. The nation that is invaded did not start the war. The invading nation did. The invaded nation has to defend itself.

The Russian invasion of Ukraine becomes, too often, a side note. To both my Ukrainian and Russian brothers and sisters in Christ, you are not forgotten! The daily prayers of many, including me, are for peace. May it be so, Lord.

Thirty-one years ago, Ukraine declared independence from the USSR, on 8/24/1991. The official website of Ukraine includes a section on “Origins & History of Ukraine.” To my non-Slavic readers, you may wish to read the entire section.

On 10/1/1994, Mrs. Appalachian Irishman and I joined two other families, to serve as missionaries, to Moscow and Klin, Russia. My “Topic Sections” includes twelve articles on or that reference “Mission Work.” I may write a book, about our mission experiences.

Ukrainian Independence marked freedom from Soviet oppression, dictatorship, and tyranny. Today, 8/24/2022, Ukrainians will find no joy – if there is any celebration of their independence from the USSR, which included, of course, Russia.

On 2/24/2022, Russia invaded Ukraine. Today, on Ukraine Independence Day, marks day 182 of the Russian invasion of their Slavic brothers in Ukraine. Vladimir Putin and his minions started the war. Both sides argue the reasons. Propaganda abounds.

The Moscow Times section on Ukraine War is a good source of information. I receive their weekly emails, on Fridays.

The inspired Luke recorded the apostle Paul's meeting of the Areopagus, in Acts 17:22-34. (The quotation, below, includes my bold highlight, for emphasis on this topic.)

Paul then stood up in the meeting of the Areopagus and said: “People of Athens! I see that in every way you are very religious. For as I walked around and looked carefully at your objects of worship, I even found an altar with this inscription: TO AN UNKNOWN GOD. So you are ignorant of the very thing you worship —and this is what I am going to proclaim to you.
“The God who made the world and everything in it is the Lord of heaven and earth and does not live in temples built by human hands. And he is not served by human hands, as if he needed anything. Rather, he himself gives everyone life and breath and everything else. From one man he made all the nations, that they should inhabit the whole earth; and he marked out their appointed times in history and the boundaries of their lands. God did this so that they would seek him and perhaps reach out for him and find him, though he is not far from any one of us. ‘For in him we live and move and have our being.’ As some of your own poets have said, ‘We are his offspring.’
“Therefore since we are God’s offspring, we should not think that the divine being is like gold or silver or stone—an image made by human design and skill. In the past God overlooked such ignorance, but now he commands all people everywhere to repent. For he has set a day when he will judge the world with justice by the man he has appointed. He has given proof of this to everyone by raising him from the dead.”
When they heard about the resurrection of the dead, some of them sneered, but others said, “We want to hear you again on this subject.” At that, Paul left the Council. Some of the people became followers of Paul and believed. Among them was Dionysius, a member of the Areopagus, also a woman named Damaris, and a number of others. (Acts 17:22-34 NIV)

God has marked the appointed times of nations and set their boundaries. God does not, however, cause nations to commit evil. His grace allows free will – for people and nations to commit evil – for a while. The inspired Old Testament records God's hand in the rise and fall of nations. Deeper thought on the subject of God's providence and why God allows evil nations to prosper – for a time – is beyond the scope of this brief article. I may unpack my thoughts, in a longer article, later.

Paul's sermon on the Areopagus, in the first century, led to the conversion of Dionysius, Damaris, and several others. Some, however, in free will, rejected Paul's words of salvation.

The word of salvation is offered. Many of my readers have chosen as Dionysius and Damaris did. Other readers have not – yet. Please choose wisely. My “Contact Form” is available, if you need my assistance. God's blessings to my readers – especially for peace in Ukraine.