I published only three articles in 2016. They are as follows.

I recorded, in my hiking record document, that I had hiked up the west trail in 35 minutes (delayed by the need to hike carefully in the snow and to take two photographs). I had then hiked across the ridgeline and down the east trail to come out.

The temperature, on that cloudy day, was about 25 Fahrenheit, with a crisp wind. About 1.5 inches of snow were on the ridge. I had seen rabbit, fox, dog, and bobcat tracks. Enjoy the following eight photographs, with my comments! 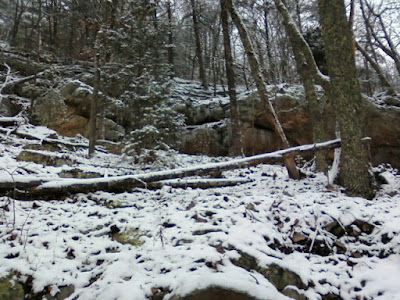 I had taken the photograph, above, at 3:15 PM. I was nearing the west bluff, on my hike up. The image looks north and up, toward the ridgeline. 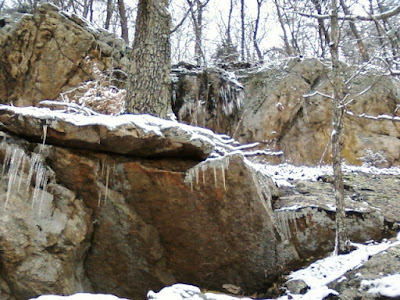 The above photograph was at 3:16 PM, near where I had been a minute earlier. The view still looks north and up, toward the ridgeline. I had wanted to photograph the icicles! 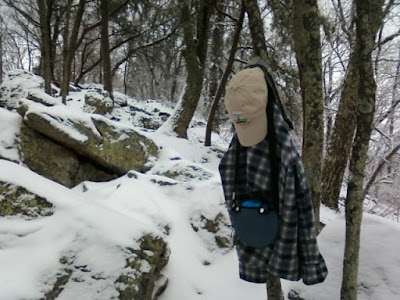 After I had removed my outer layer, hiking cap, and canteen, I took the photograph, above, at 3:27 PM. The exertion on the hike up had warmed me too much. I kept my T-shirt and sweatshirt on, to let the crisp air cool off the sweat. The image is on the west bluff, looking east, toward the ridgeline. 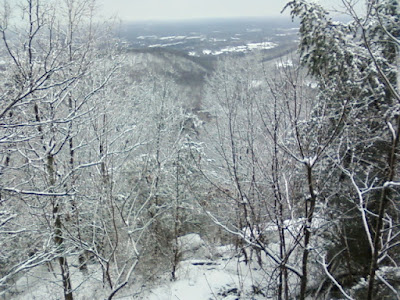 A minute later, at 3:28 PM, I took the above photograph from the same west bluff. The image looks down and southwest, toward Knoxville. 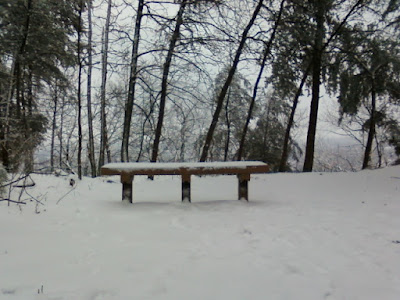 At this 3:45 PM photograph, I was heading east, on the ridge trail. Several years before, a Boy Scout had built and placed the bench at the location. The marker on the bench denotes by whom and on what date the bench had been placed there. Those are my footprints. 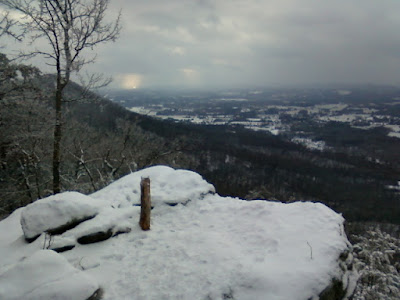 At 4:35 PM, I took the above photograph at the upper, middle bluff, after having hiked the ridgeline farther eastward, to arrive at the bluff. The image looks northwest, as the sun was close to setting. The west bluff is visible, in the upper left of the image. The human tracks are mine (as no one else had hiked that day, apparently). I see some animal tracks also. 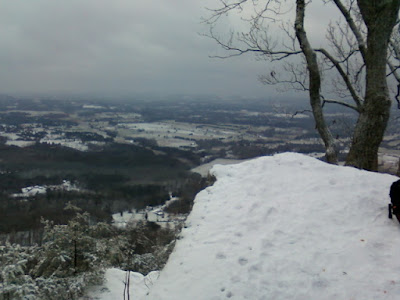 A minute later, at 4:36 PM, I photographed that view from the bluff, looking northeast. Again, the human tracks are mine. I see the animal tracks here also. 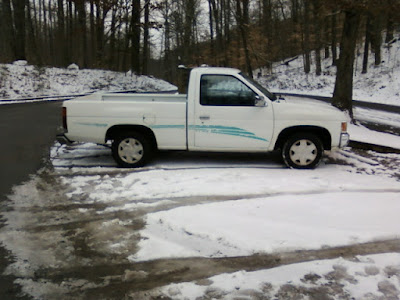 It had taken me just under an hour, to hike the short distance west on the ridgeline and then to hike down on the east trail. At 5:24 PM, I had taken the above photograph of my 1995 Nissan pickup, who had been awaiting my return. The tracks of only one other vehicle were present, after my hike. No other vehicle tracks were present, before my truck and I had arrived. I had never seen another hiker. (My 1995 Nissan pickup died, trying to save my life, on 3/29/2016.)

I have taken a long hiking sabbatical (since 4/18/2021). My “bionic” left shoulder, right knee, and right foot have each improved. My right knee and foot, in particular, could still take the pounding – even easier now.

Lord willing, I anticipate that the urge to hike, which sparks in me at times, will ignite fully. Other interests -- such as the 177 articles that I have published on this website, from 4/28/2021 until yesterday (1/23/2023) – have ignited my greater interest. Still yet, today would have been a good day for a hike!