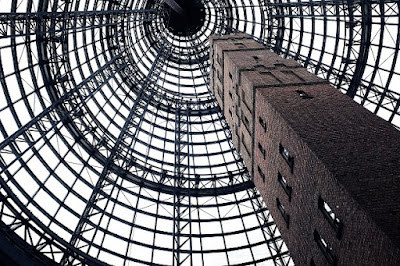 2/21/2017 photo in Melbourne, Australia, by Alex Knight on Unsplash. Free to use under the Unsplash License.

If I look too long at the high ceiling (surrounding and above the tower, in the photograph), then I start to get dizzy. I'll stop looking and continue to write now.

The media were a buzz, on 1/19/2023. They still buzz. Aside from the buzzing on southern border insecurity, President Biden's classified documents, former President Trump's classified documents, ad nauseam, this buzz is about the USSA debt ceiling. One of several sources is: “House conservative leader rips media for ‘irrational’ debt ceiling coverage, vows ‘serious fiscal reform,’ on Fox News, by Peter Kasperowicz, 1/19/2023. The article states, in part:

The U.S. hit the debt ceiling on Thursday, which means the government cannot borrow anything above the $31.381 trillion it has borrowed so far. House Republicans have said they would require deep spending cuts as a condition for raising the ceiling, but the Biden administration has said it will not negotiate.

I am a practical man, who thinks logically. This article places the USSA debt ceiling buzz in the context of recent household income and expenses, for Mrs. Appalachian Irishman and me. Do we raise the debt ceiling, increase income, or lower spending?

Every member of Congress needs to read this article, which is published, as sage advice, as a public service announcement. What should we (as a household and as a nation) do? The conclusion will answer the question.

Household: my wife and I still have a mortgage debt. That's the only debt that we have. Our household income is sufficient to meet household expenses, with a sufficient surplus. Our surplus, built up in savings over many years, could pay off our mortgage debt and leave a lower surplus. This is not bragging. It is God's grace, our health, and our work ethic.

How many times has Congress raised the debt ceiling? The official answer is at U.S. Department of the Treasury, Debt Limit:

Since 1960, Congress has acted 78 separate times to permanently raise, temporarily extend, or revise the definition of the debt limit – 49 times under Republican presidents and 29 times under Democratic presidents. Congressional leaders in both parties have recognized that this is necessary.

Necessary? Really? Yes, both parties are at fault, especially Democrats – as a study of congressional debt ceiling votes, by party, since 1960 will surely prove. Presidents can't raise the debt limit.

I was born in 1960. I'm 62 years old. I have not needed to raise my debt ceiling limit 1.25 times a year, in each year of my life. I have never had that kind of an income versus spending problem. Dad taught me that money doesn't grow on trees. You've got to make it, to spend it. Don't spend more than you make. If you need to borrow, then get out of debt as fast as you can.

The “guvrmint,” however, has had to raise its debt ceiling limit 1.25 times a year, in each year, from 1960 to 2022 – 62 years. It has a definite income versus spending problem. The “guvrmint” must think that money grows on trees – or is devalued, causing inflation, by printing more almost worthless Monopoly money dollars.

In short, the “guvrmint” must stop raising its debt ceiling and devise a plan to reduce its debt.

Household: We have sufficient income for manageable expenses. I draw retirement income. My wife, bless her heart, is <deleted by Mrs. Appalachian Irishman> years younger than me, so she must work another year or so. By God's grace and our wisdom, we manage the best that we can, to keep expenses below our income.

If our household expenses, at some point, require additional income, then I could find a part-time job. I know how much the “socialist insecurity administration” states that I could earn, without reducing the amount of money that they owe me on a monthly basis. At this point, I have toyed with attempts to find the right part-time job, but I've not yet found a position that would serve my interests. I could become less picky, if inflation continues to be so uncontrolled.

USSA: the “guvrmint” has sufficient income but unmanageable expenses. The Fiscal Data on Treasury.gov section is: “How much revenue has the U.S. government collected this year?” (Note: scroll down to the “Federal Revenue Overview” segment.)

Household: my wife and I are thrifty. We don't just “blow money.” We limit our so-called “discretionary” spending.

Unfortunately, runaway inflation (caused by federal spending) forces us to pay more for groceries, utilities, gasoline, household supplies, home and vehicle maintenance, and so forth. We track and budget our costs. My article of 9/2/2022 was a snapshot on how grocery costs have increased.

Upcoming, we know that our 2012 Nissan Sentra needs new struts (estimated at about $1,100 total cost for parts and labor). Property tax must be paid before 2/28/2023. Thankfully, we have managed, and we should be able to manage those expenses. Our surplus, however, will be lowered, at least for a while.

In this period of inflation, we are unable to lower total spending. We, however, reduce costs, by dining out rarely and by not just “blowing money.” By God's grace, we will survive. (Jesus' words, in Matthew 6:25-34, assure us.)

USSA: the “guvrmint,” in contrast, is not thrifty. It, apparently, spends money like a drunken sailor, with apology to all sailors. Yes, certain outlays are necessary. Others are certainly not. I could unpack my thoughts on necessary verses wasteful spending, but I will not take the time to do so, in this article. Anyone with any fiscal common sense should know what I'm thinking.

Any “guvrmint” that has had to raise its debt ceiling limit 1.25 times a year, in each year, from 1960 to 2022, has a spending problem or obsession! That's what our “guvrmint” has been doing.

My article of 1/11/2021 cited a credible source, which indicated that, in 2014, the “guvrmint” started spending more than it brought in. Could you imagine spending more than your income, for nine inclusive years in a row? That's what our “guvrmint” has been doing, under various Presidents and Congresses. 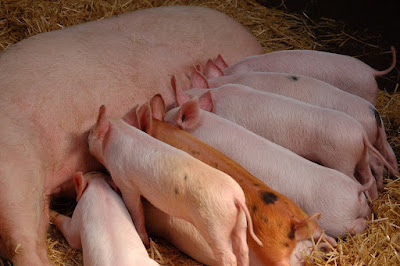 3/2/2022 photo by Alan Roberts on Unsplash. Free to use under the Unsplash License.

The “guvrmint” needs to remove some of the “piglets” that are sucking on the “tits.”

The search of my website by “debt” finds the following six articles, listed below, in chronological order. This is my seventh article on the subject of national debt.

Should the USSA raise the debt ceiling? No! If the house is full of garbage spending, then raising the roof will only allow more garbage to be added. Instead, haul off some garbage spending.

Should the USSA lower spending? Absolutely! Remember, the national debt is available on at least three websites: Fiscal Data on Treasury.gov, an official website of the U.S. government (Total Public Debt Outstanding), USA Debt Clock, and US Debt Clock – which also records debt per citizen ($94,200 debt per citizen, as of 1/23/2023, 2:45 PM).

You are welcome, dear reader, to share this article with anyone – especially to any member of Congress. Those folks need our common sense advice, if they will listen.