Yes, I figured that you did. Mrs. Appalachian Irishman (well, that's what I call her when I write; you know her name; it's just funny, Dad) and I had closed the construction to permanent loan, to build our house. The digging for the basement had started. We were in the apartment. That tightness in your chest was more that you thought.

On Christmas Eve, do you remember when you and I were in your hospital room? That one cardiologist gave you six months to live. We just looked at each other. I'm glad that Dr. Sholes' nurse was listening, in the hallway! Dr. Sholes, the best cardiologist we've ever known, called a few minutes after the “quack cardiologist” left your room. Dr. Sholes gave us hope!

Well, at least you were able to come home, on that Christmas Eve (Tuesday). Doug drove you in his truck. I followed in mine. You may not know this, Dad, but I prayed to the Good Lord that I would go insane – if I was following you home, on Christmas Eve, to die in a few days or months. I had followed the ambulance that brought Mom home, on Christmas Eve 2000, to see her die at home four days later. Of course, you know. You had come home, after having bought a few Christmas gifts, about the time Mom went to see Jesus. You had been trying to keep up the Christmas gift giving tradition, for Mom's sake. I know that you loved Mom. I still have the kerosene lamp that Mom and you bought us that day. It is on a shelf in our kitchen.

At home, on that cold Christmas Eve, you could barely walk from the living room to the bathroom, without stopping to catch your breath. I still don't know why you decided to work on the old wall clock that still hands on the living room wall at the homeplace. It had stopped working again. You took it apart, lubricated it, and got it working again. You refused our help.

The Good Lord must have heard my prayer to Him, while following Doug and you, from the hospital. After you had fixed that old wall clock, you got up to walk around. You felt a “pop” in your chest. Whatever that “pop” was, it was a good thing! You started walking around the house, without the need to stop to catch your breath! That was great! I saw it! Thanks, Good Lord! We needed that prayer answered! Dad needed that prayer answered! Dad needed that “pop!” The Good Lord doesn't care much for the trivial prayers. He cared about that one! He knew that I needed His affirmative!

Well, I have many other details that I wrote in my December 20002 and January 2003 calendars. I recon we known them well enough. Dr. Sholes had arranged your appointment with Dr. Glassford, a fine cardiologist surgeon, at St. Thomas Hospital, in Nashville. The weather was cool and sunny at least! That was good traveling weather! Yep, I thought that you would remember!

Doug and you met me in Knoxville, on Sunday, 1/12/2003. Do you remember the Pilot gas station where we met? I was glad to see you walk inside that store with us, as if you could climb any mountain! Well, off to Nashville we went. I'm glad that the hospital has a hotel room within walking distance.

The next day, 1/13/2003, we were up, shaved (or beard trimmed for me), and ready to meet Dr. Glassford, at 10 AM. Dad, as you recall, I was amazed – absolutely amazed – by how well you walked from the hotel to the hospital, through the hospital maze, until we found Dr. Glassford's office! I think that you were trying to make Doug and me keep up with you! That was great! You were feeling your oats!

I wonder why Dr. Glassford had that hole in his long-sleeve shirt. He was a “country boy,” who was brilliant! I guess he didn't care. How old was he? You figure about 62? I recon so. He looked trim and fit for his age (like me; okay, I'm crowin' a bit, Dad!). The four of us sparked an interesting and educational conversation. So, one-third of your heart was dead. The blockages were to areas of your heart that were already dead. The other 15% blockage was no concern. You did not need heart surgery. The risk of dying from the surgery was greater than the reward. Good! Let's go home! We did! Well, we each went to our respective homes. Supper at the Cracker Barrel was great!

By the way, Dad, did I ever tell you about facing down the bigger and younger man, in the apartment behind my wife and me? It was about 12:15 AM, on 1/14/2003. I'd been back to our little apartment about four hours. I was worn out. The idiot man and his woman were fighting. I think the coward was beating on her. I went around to their door. I knocked. The bigger and younger man met me. I told him, with fire in my eyes and stubborn Irish will in my heart, that he'd better stop beating on his woman, cool down, and shut up – otherwise, I had 911 on my cell phone, and I was ready to punch call! (I didn't have a pistol then. Hey, Dad, I have a lifetime carry permit and three firearms now! I thought that you would like that! Well, one firearm is Papaw Wood's 22 rifle. Do you remember when you shot that rifle, to kill the buzzard that was on the spot where Buddy, a great dog, was lying dead, before Doug and I could get there to bury Buddy?) The idiot “man” (such as he was) backed down! I don't recall hearing him beat on his woman after that! Well, I hope that I educated him and helped his woman.

I agree, Dad. Let's talk about a much better memory! Well, 2003 rolled on, with many details that I have written on my 2003 calendar. The water well driller convention was the week of August 3 - 8, 2003, in Myrtle Beach, South Carolina. (They still have an annual convention. They have a fancy website, Jubilee Water Show, now.) Yes, Dad, I remember when Mom and you took two brothers and me to Myrtle Beach, for the convention, years ago. Sorry, Doug, you were not born yet. It had to have been 1970 to 1972. No, Dad, I'm still mad! You kicked sand in my face, when we were racing, on the sand, to see who was faster! That was NOT fair! Yea, yea, I'm joking. You won!

I'm glad that you (and your 1/3 dead heart) were feeling you oats! Gwyn Calfee and you joined my wife and my at Myrtle Beach, South Carolina! We had arrived on 8/2/2003, that Saturday. Y'all drove down the next day. Y'all enjoyed the convention during the day, while we enjoyed the beach. Every late afternoon, however, we came to your hotel. (It was not too far from our ocean-side hotel!) Y'all joined us. Well, y'all stopped by to see us at the beach a time or two! I drove the four of us to the eating location that Gwyn and you picked! The stories that we told each other. The laughs and jokes we had! Those five days, at the beach, were great times! I have several photographs, of the old film type. I'm saving them! 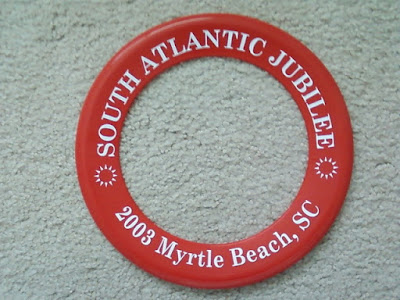 Hey, Dad! I still have the 2003 convention Frisbee that you gave me! The one that you kept is still on a kitchen wall, at the homeplace. I keep mine in my closet, perched on a high shelf. Last Sunday afternoon, I dusted off the Frisbee and placed it on the carpet, which looks like sand. I thought that you'd like to see that I still have that Frisbee! It may still have a few grains of sand on it, from tossing it on the beach! Yes, I've had this conversation in mind since last Sunday!

What year was that, Dad, when you hiked up Clingmans Dome by yourself? It was after Myrtle Beach 2003. I have the details written on one of my calendars! You finally admitted to us that you had hiked alone! You said that you had to stop a few times, to rest on your hike up. It took you a few weeks or months to admit that to your sons! I remember being worried that you had done that! I was wrong! You knew your limitations. You had been thinking about the times that you took Mom to the Great Smoky Mountains National Park. You were remembering, as you hiked. I've done that many times, over the years. I understand. Heck! I remember a few times that you took Mom and us boys! Do you remember the time the mother bear almost got us? I do! One time, we had a great swimming pool, at the motel!

Well, I'll sign off for now, Dad. It was good to talk with you today! Happy Father's Day! I'll see you again soon – well, it may take me a few decades, but I'll get there! Okay, here it comes. Watch out! I LOVE YOU, DAD!