I had been trying to find ways to occupy my fertile mind, after work and before supper, on 6/9/2021, Wednesday. I had written most of this article, but supper then work, etc., for the next two days got in my way. (Hey, corporate entity, find and hire me to write for you!) I finished writing and published this article today.

Forget the incessant onslaught of moral decay and socialist march to “socialist Utopia!” This will be fun! (As a side note, I don't know why Mrs. Appalachian Irishman had been watching “pregnant girl with restless leg syndrome” show on TV, on 6/9/2021, in the late afternoon.)

The war started, by a neighbor's visit on the front porch, in the summer of 2020. We both talked with her. Molly conversed with her daughter. It seemed that our neighbor thought that too many folks were driving too fast, in our small, cul-de-sac subdivision. (It had happened a few times in the spring of last year, but it had stopped.) I signed the petition, not in favor of “speed humps,” as they are called, with my pithy comments. Almost a year went by. I assumed that it was much to do about nothing. I assumed incorrectly. What do you make when you assume? It makes an ass of you and me. (I'm sorry, Mom! “Ass” is in the King James version of the English Bible!)

On 4/12/2021, I had sent a postal letter to the Knox County bureaucrat, in reply to his 3/30/2021 letter that we had received on 4/10/2021 (my deceased mother-in-law's birthday; she would be proud of me). Apparently, without other notice, the voting process had started! The protocol indicates that a subdivision meeting would have happened first. The bureaucrat violated the protocol, due to the new cold virus. The voting process was on!

Also, on 4/12/2021, I had mailed a copy of my 4/12/2021 letter to the bureaucrat – to every other owner in our little subdivision. Mrs. Appalachian Irishman had assisted me, in preparing the several letters for mailing. I had taken a hard but polite stand against the speed bumps!

From then, until 6/4/2021, Friday, I was the neighborhood general in the fight against the speed bumps. I did not start conversations with neighbors. Neighbors saw me outside at times. We conversed. I expressed my stand. The neighbors, with whom I spoke, agreed.

You can see the Knox County website, if you hurry, to find the website proof, before it is updated.

Otherwise, on 6/10/2021, we received the postcard, mailed 6/8/2021, from the Knox County bureaucrat – indicating that we had won the Speed Bump War! (Why does the post office take two days for local delivery? Shouldn't it be next day? It used to be.) 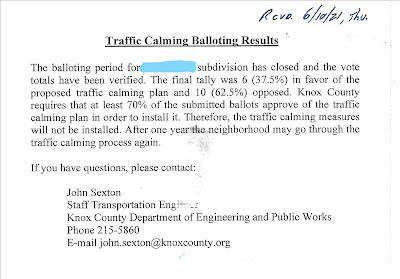 I blotted out our subdivision name, for privacy. The bureaucrat's name and details are public domain. He is an employee of mine – and of all Knox County taxpayers.

Nine of our neighbors and I won the Speed Bump War – by a landslide! I doubt that the six neighbors will try to fight us again, after a year goes by. I hope that the neighbor, who started this, learned a lesson. We are a small and friendly little neighborhood. Neighbors should talk with each other! We could arrange a casual meeting to talk! There is NO SENSE in shooting a “bureaucratic bullet!” If it happens again, I will drop another “bureaucratic nuclear bomb!”

I hope that you liked this article! I enjoyed writing it! It helped further relax my “bionic” joints!

By the way, I'm taking a red capsule, over the counter, that contains krill oil, hyaluronic acid, etc. The bottle had expired in 04/2019. My wife or I had bought it in 2017 or 2018. I had taken the red capsules back then. They didn't seem to have helped. I stopped taking them. I decided to try again, last Sunday. I had a few capsules left. The krill oil, hyaluronic acid, etc., seems to be stretching out my “multi-trauma” muscle damage! Mrs. Appalachian Irishman is on the hunt for another bottle of those red capsules! I'll keep taking them – if they keep helping! My “bionic” life started on 3/29/2016. I've written about it. Has it been that long ago? I recon so.